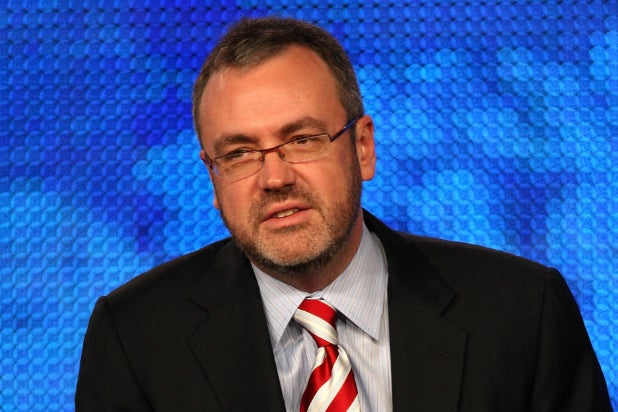 Steve Capus, the executive producer of “CBS Evening News” since 2014, is departing the program in a few weeks. Mosheh Oinounou will replace Capus in the role.

“Now that [Scott Pelley-replacement Jeff Glor] is successfully launched, it’s time to hand over the reins,” Capus (pictured above) said Tuesday in an internal memo to his staff, which was obtained by TheWrap. “In the coming weeks, I will begin work on my next chapters. Regardless of whether those chapters are written here at CBS or elsewhere, I’m looking forward to new endeavors.”

Capus’ exit follows the departure of NBC’s “Today” show executive producer Don Nash, who is leaving his show after 30 years. Libby Leist will replace Nash in the gig.

This morning, Steve Capus announced to the Evening News team that he will be leaving the broadcast in the coming weeks. We are all immensely grateful to Steve for his tireless work on behalf of CBS News over the last four-plus years. The exceptional journalism that remains a hallmark of the CBS Evening News has thrived under Steve’s leadership, earning more than a dozen awards. His wealth of experience supported three anchors with the highest standards of the trade, culminating in the recent launch of the CBS Evening News with Jeff Glor.

With that anchor transition complete we will be adding emphasis to new approaches and digital extensions from Jeff and other correspondents all around our organization. Jeff’s commitment to real news coverage is clear, notably his breaking news reporting and recent broadcast from Santa Barbara County in particular. The journalism that we all showcase on CBS stations each evening can live 24/7 in a form relevant to an even wider range of viewers online.

To continue this evolution, Mosheh Oinounou has been named Executive Producer and will begin leading the team after a transition. An entrepreneur in our newsroom, Mosheh was part of the launch leadership of CBSN, streaming our coverage to all devices on every significant platform. Mosheh’s digital experience and creativity will help make the CBS Evening News with Jeff Glor an important part of the future of news.

Mosheh will be working closely with Ingrid as he builds his team and will be looking to collaborate with many of you going forward.

I look forward to working with Steve through his transition as we explore the best opportunities within CBS for Steve to apply his talents. We’ll host a proper EN send-off soon. Attached is our press release going out this morning.

And here is Capus’ email:

There are few times in a professional life when one is presented with the perfect alignment of opportunity, challenge and calling. That’s exactly the way I feel about the last four years at the helm of the CBS Evening News.

During one of the most unique and challenging news cycles, our Evening News team has consistently produced a high-quality, respected and smart broadcast. This team of journalists is world-class, and I’ve been honored to put a spotlight on so many collective and individual contributions to the finest in broadcast journalism. Partnering with my senior staff, world-wide production teams, Scott Pelley, Anthony Mason and now Jeff Glor has been a gratifying privilege. David Rhodes has enthusiastically supported our initiatives, and I’ve been fortunate to serve on his senior management group.

Just three months ago, David entrusted my team with launching Jeff’s tenure at Evening News. It’s been a whirlwind of transition planning; revamping the production and re-imaging what it takes to succeed. Jeff’s already anchored many noteworthy broadcasts, which all point to an extremely bright future for Jeff and the CBS Evening News.

Now that Jeff is successfully launched, it’s time to hand over the reins. In the coming weeks, I will begin work on my next chapters. Regardless of whether those chapters are written here at CBS or elsewhere, I’m looking forward to new endeavors. Between now and then, I will continue to serve as executive editor while doing everything I can to ensure an orderly transition with the new executive producer.

In recent years, the CBS Evening News has earned every major broadcast journalism award and top honors. I take great personal pride in those accomplishments and our distinctive division-wide commitment to excellence. None of it is possible without the dedicated talents of the women and men of CBS News. Thank you one and all.

Here’s to the road ahead…

These stars rose to fame at a young age, but crumbled (or are in the process of crumbling) under the pressure of being in the public eye as they transitioned into adulthood

Troubling tweets -- like the ones she sent from the Betty Ford Center while in rehab -- are the least of the problems, legal and otherwise, Lindsay Lohan has dealt with in the past few years.
View In Gallery