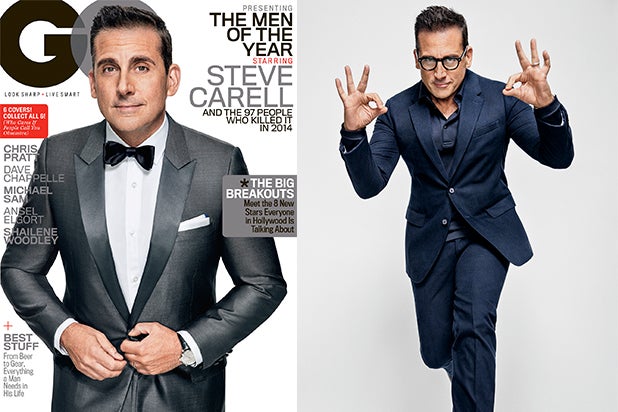 A majority of audiences know Steve Carell as the loveable 40-year-old virgin, the bumbling weather man or the middling corporate shmuck with a stale marriage.

But for his dark turn as awkward millionaire John du Pont in “Foxcatcher,” Carell is generating awards buzz and GQ has crowned him one of its Men of the Year, specifically the superlative of year’s best villain.

The actor is counted on one of six glossy covers in addition to Chris Pratt, Dave Chappelle, Shailene Woodley, Ansel Elgort and NFL hopeful Michael Sam.

“I think with anyone who seems to be content and well-adjusted, which I think I am, there’s a need to find a darkness or a wound,” Carell told the mag.

“Judd … spoke to that in regards to me: that he could never seem to find my wound,” Carell said of his “40-Year-Old Virgin” director Judd Apatow,” so either I don’t have one, or I was really stealthy in hiding it from him.”

Secret demons or not, his work in “Foxcatcher” easily finds its footing. “His performance might be the showiest and most surprising part of a quiet but multi-layered and richly detailed drama,” TheWrap wrote of Carell in our film review.

GQ’s Men of the Year issue is currently on newsstands.

Plus: Reese Witherspoon and Jim Toth roaming free on "American ground," Brad Pitt, the "American Pie" guys back for 24 hours only, and inside the best industry bashes of the week