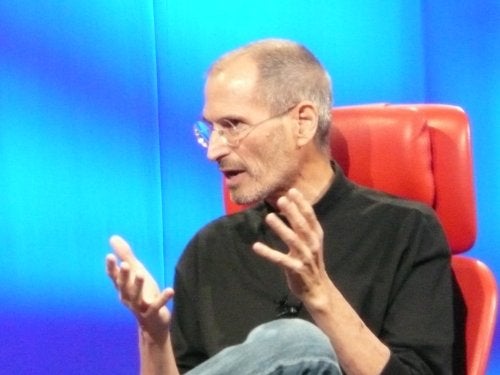 Apple CEO Steve Jobs gave a ringing defense of journalism, while  explaining that he couldn’t let Gizmodo’s leak of the company’s new iPhone go, in a rare interview on Tuesday.

"I’d rather quit," he said he told colleagues who advised him to let the Gizmodo leak slide.

But first, Jobs addressed the future of journalism at the annual AllThingsD conference.

Looking scarily thin, Jobs said he hoped the new iPad might provide a platform to help newspapers get paid for their content.

"I don’t want to see us descend into a nation of bloggers myself," he said. "We need editorial more than ever right now."

Jobs was asked if Apple, with the IPad, should assume a role in helping to save journalism, given the possibility to charge for newspaper apps.

"One of my beliefs, very strongly, is that any democracy depends on a free, healthy press," he said.  "Anything that we can do to help the New York Times, the Washington Post, the Wall Street Journal find new ways of expression so they can afford to get paid, so they can afford to keep their editorial operations intact, I’m all for it."

And he offered publishers advice: "The biggest lesson Apple has learned is: Price it aggressively and go for volume. And anytime we haven’t done that, we’ve had more attenuated success."

He continued: "I believe people are willing to pay for content. I believe in media, and in news content.

Jobs gave a 90 minute interview in which he addressed — if never quite opined about — his relationship with Google, his run-in with Gizmodo, his disinterest in a television product and his views on privacy.

None of it particularly made news. But it’s worth sharing the thoughts of a guy who now runs the largest technology company in the world, having just overtaken Microsoft in market capitalization (at $222 billion).

Most interesting, perhaps, was Jobs’ insistence that he will not change Apple’s culture despite the size of the company. Applie "is still run like a start-up," he said. "I don’t see why you have to change if you get big."

The company, he said, has "zero" committees. One person heads up the various divisions, they meet once a week, share ideas and hash out problems.

When the company’s new iPhone was swiped at a bar, and ended up on the web-site Gizmodo, Jobs said his advisers told him to "let it slide," because the company had now grown so influential.

"I got a lot of advice from people who said, you’ve got to just let it slide," he said. "You shouldn’t go after a journalist because they took a product, and tried to extort you. The company is big now, you should let it slide. I thought deepy about it, and I ended up concluding that the worst thing that could happen is if as company gets bigger and we get a little more influence in the world is if we changed out core values and started letting it slide"

Early photo of Steve Jobs speaking at AllThingsD, speaking about his fight over Flash with Adobe, and addressing the brouhaha over the leak of the iPhone.

On his choice not to make Apple products compatible with Adobe’s Flash:

"Sometimes you have to pick the things that look like they’re going to be the right horses to ride going forward."

Heading out to hear the CEO of Apple, Steve Jobs, talk about himself at AllThingsD, one of my favorite conferences anywhere, this year taking place in Palos Verdes.

Why would anyone be interested in what Jobs has to say? Um: iPad. iPhone. iTunes. Apple television. Kind of hard to think of anyone who has more distinctly marked American consumer society in the century so far.

But here he will answer questions before an audience of his tech peers. I personally want to know how it feels to run the largest consumer product corporation in America, with the second largest market cap in the country.

And while I myself do not have an iPhone, I know there are plenty who want to know what he intends to do about AT&T. If you tweet me your questions (@sharonwaxman), I’ll try to ask him one.