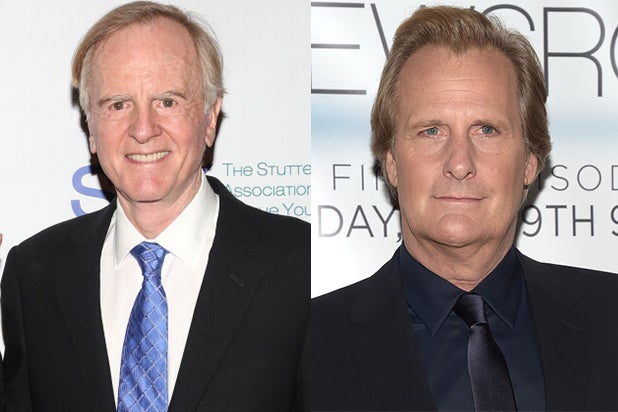 Jeff Daniels, who recently won an Emmy for “The Newsroom,” is being eyed to play former Apple CEO John Sculley in Danny Boyle‘s Steve Jobs movie, multiple individuals familiar with the Universal project have told TheWrap.

Michael Fassbender has closed a deal to star as the Apple icon, while Seth Rogen is set to co-star as Jobs’ close confidante and Apple co-founder Steve Wozniak.

While Daniels does not have an official offer yet, one is expected to materialize soon, as he’s considered Boyle’s top choice for the key supporting role.

A representative for Universal Pictures did not immediately respond to a request for comment.

Mark Gordon, Guymon Casady and Christian Colson are producing the film with Scott Rudin, who is an executive producer on “The Newsroom” and previously worked with Daniels on “The Hours.”

Sculley, who served as Apple’s CEO from 1983-1993, was among the people in Jobs’ inner circle who Sorkin met with to discuss the project. Matthew Modine played Sculley in the 2013 Ashton Kutcher movie “Jobs.”

Universal recently picked up the Steve Jobs project from Sony, which inexplicably put it in turnaround. Production is now slated to start in the spring.

On the feature side, Daniels recently starred in Rian Johnson’s “Looper” and is preparing to return to sci-fi for Ridley Scott’s “The Martian,” which stars Matt Damon and Jessica Chastain. He currently stars opposite Jim Carrey in “Dumb and Dumber To,” which has grossed $117 million worldwide in less than one month of release.

Daniels previously starred in the box office hits “Speed” and “Arachnophobia” as well as the acclaimed dramas “Good Night, and Good Luck” and “Terms of Endearment.” He’s represented by ICM Partners.