Steve Jobs gave the world a whole new kind of love. By demanding aesthetic beauty, technical excellence and a connection with the user from each Apple product, he became a legend by single-handedly inventing our passionate affairs with consumer electronics.

When he died in 2011, the Apple co-founder was mourned around the world — perhaps the only CEO in the history of the world to be lamented so widely. The first shot of Alex Gibney‘s “Steve Jobs: The Man in the Machine” shows piles of bouquets laid outside an Apple Store on a gray day, much like the heartfelt tributes that lined London streets after Princess Diana’s fatal car crash.

But outside of her dysfunctional relationships with her royal in-laws, Diana was most famous for her charitable works. Jobs, on the other hand, put an end to Apple’s corporate philanthropy, made the lives of many of his employees hell, and refused to recognize his first child for years (despite being haunted by the fact of his own adoption). Even his innovation of making computers, telephones and music players infatuation-worthy — a love that’s directed not at fellow human beings, but at objects made in dubious (if not injurious) working conditions — is a questionable legacy.

There’s always someone who feels the need to puncture the romance of the Beatles and the delicate utopia of “Imagine” by pointing out that John Lennon was a wife beater. (Often, that person is me.) In “The Man in the Machine,” Gibney accomplishes a similar feat of killing others’ heroes by arguing that — surprise — Jobs the man fell far short of the myth. According to several accounts, the only thing that truly distinguished Mr. Think Different, other than his singular intellect, was his startling lack of empathy.

That interpretation of Jobs is a familiar one. But “The Man in the Machine” is still wholly engrossing, especially in its first half, when it tells its thrilling creation stories: of one of the first mass-produced personal computers (the Apple II), of Jobs’ nasty business instincts, of building and expanding an oft-troubled start-up into the world’s most valuable brand. One former employee tears up as he describes how the dedication Jobs demanded in the office cost him his wife and children. Just a few scenes later, that same employee chokes up once again, in awe of his former boss once more: “He’s the only person who could have done [what he did].” 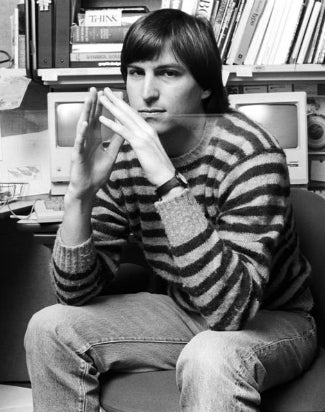 In addition to a wide-ranging set of interviews, Gibney has amassed a fine collection of archival footage. In one, an adorable 20-something Jobs, handsomer than many movie stars, marvels at the fact that he’s about to be on television. While the unauthorized documentary offers little new information about its subject, it’s a well-crafted overview of Jobs’ career. Somewhat surprisingly, there’s little evolution of him as a person. In many respects, Jobs never seems to have grown up from the arrogant teenager who informed a Buddhist monk that he believed himself to have reached enlightenment.

The film’s explanations of Jobs’ exceptional gifts and extraordinary contributions are thoroughly convincing, as are the second hour’s arguments that Jobs’ avarice and vindictive personality seeped into Apple’s daily business. The low pay and backbreaking hours suffered by its Chinese laborers are the best known among the company’s sins, but there are also stock shenanigans and reprisals against journalists and former employees that Jobs seems to have directed himself. And that’s not even counting leaving his ex-girlfriend and baby daughter to survive on welfare (until court-ordered otherwise) while he was on his way to making his second hundred million.

And so Steve Jobs joins the vast pantheon of great men who made the world a better place (for the most part) while being a remarkable jerk in his personal life. Gibney’s outsider approach — which comes with built-in limitations with regards to access — doesn’t let the man, his widow or their children speak for themselves, so Jobs’ actions do all the talking here. For a peek into his genius mind, we may have to wait another month for Michael Fassbender and Aaron Sorkin‘s interpretation of it in their biopic “Steve Jobs.”