Steve Schmidt isn’t just aiming his recent string of no-f—s-given, Twitter tell-alls at the conservative movement and the McCain family. On Tuesday morning, he also laid into President Joe Biden, who said has turned into “a senile cartoon with an approval level in the 30’s” because, Schmidt said, Biden isn’t “fighting back” against Republicans.

The former John McCain adviser also wants people to know that his confessional, hugely revealing comments about John McCain and his daughter Meghan McCain over the last few days aren’t evidence that he’s “unhinged,” He says he’s just pushing back against the “insanity” of movement conservatives, and that what actually is unhinged is the idea that responding to that insanity will spread it.

“The idea that is unhinged to respond to insanity or that it is the response that spreads the insanity is an extremely stupid idea. It is what has crippled an able President and turned him into a senile cartoon with an approval level in the 30’s,” Schmidt wrote in a Twitter thread posted Tuesday morning, referring at the end, in case it wasn’t clear, to Biden. 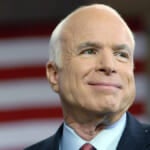 Schmidt praised Biden’s handling of the crisis in Ukraine, but warned that here in America, Biden faces “the most sophisticated, coordinated, venomous, dishonest, divisive and insane propaganda machine in American history, bar none. It is ruthless, coordinated and determined to take power. It is strategic and purposeful.”

And, Schmidt continued, it isn’t unhinged to fight back “against a mob of thugs, conspiracy theorists, fascists, crooks, weirdos and scumbags.” But, he added, not doing that is what is unhinged, and, Schmidt said, that describes Joe Biden.

If Biden “doesn’t reject” that strategy, Schmidt said, “then the notion that he will be the Dem Nominee in 24 on the basis of Incumbency is as equally delusional as Trumps claims that he can drink water with one hand.”

Schmidt went on to compare the current situation in American politics to that of the international community in the 1930s as Germany rearmed under Hitler. “What happened? Did the US, England and France start rearming? They did not because there was a CW that reciprocally arming would be inherently provocative to the Nazi’s. In fact, the stupidity went deeper. The Politicians made the argument that disarming faster than required would show the Nazis they didn’t need to rearm at all,” Schmidt said. 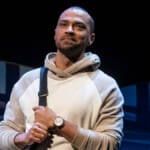 Schmidt continued that he worries the United States will be lost “to an extreme cabal of MAGA fascists (completely historic and accurate use),” consigning “our children to a small and much darker world.”

The rant comes on what is now day 5 of his very public, apparent full break with the conservative movement, which started when he bluntly called out Meghan McCain for lies she told about him and for what he said was unbelievably rude behavior during her Father’s presidential run in 2008. It continued when he disclosed his belief that John McCain was surrounded by extremely corrupt people, and revealed that McCain lied when he denied an affair with a lobbyist in 2008.

You can read about that stuff here, and here. And see Schmidt’s latest screed below.