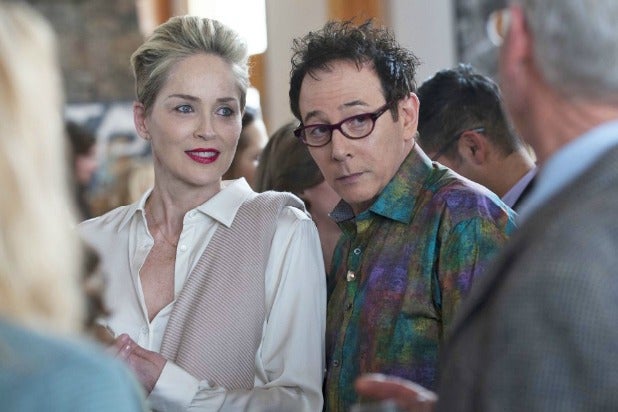 Steven Soderbergh has always been known for experimenting and twisting the story structure of his films and shows. His latest “Mosaic,” an interactive murder mystery, is no exception. “Mosaic” became available back in November via an app on Apple and Android devices. But the “show” is premiering as a six-part miniseries this Monday on HBO.

So what exactly is the difference? Do you have to watch both versions to get the full story? Or is there stuff you’ll miss if you only watch one or the other? TheWrap is here to help you unravel the tapestry of “Mosaic.”

Watching “Mosaic” via the app is designed as something of a choose-your-own-adventure all building to a whodunit murder mystery. After watching a first chapter introducing you to wealthy children’s author Olivia Lake (Sharon Stone) and her confidant JC (Paul Reubens), you’re given the choice via a story map to follow the arc of a particular character. There’s Joel (Garrett Hedlund), a handsome, young, aspiring artist who lives and works on Olivia’s estate. And there’s Eric (Frederick Weller), who has been hired to secretly get Olivia to sell her property, but ends up falling in love with her instead.

Since each chapter follows the point of view of a specific character, you may see the same scene from a previous chapter, but from a slightly different camera angle. Even the dialogue might be tweaked to suggest how each character perceives the interaction differently.

“Mosaic” isn’t a video game, so the story itself or the actions of the characters don’t change based on the choices you make. However, depending on which track you take and which chapters you skip, you may miss key details about a character’s alibi or clues about the murder. However, Soderbergh said in an interview with Vulture that while they tinkered with the idea, there’s no scenario in which you don’t find out the identity of the killer.

Embedded within the digital app are interactive clues and video clips called “Discoveries.” As you watch a chapter, you’ll receive what’s effectively a brief push notification that if you engage with it, will briefly take you away from the current scene. In one instance a lawyer is discussing a plea deal with her client in prison, and a discovery queues up a scene in which the lawyer and prosecutor are hashing out that deal. In another, when the murder victim’s hand is found, a bit.ly link pops up that directs you to a news article describing the event.

Watching “Mosaic” on a device effectively mimics the distractions and second screens that people already use when watching TV regularly. So these discoveries are designed to keep you on your toes and engaged. Soderbergh added in his Vulture interview that with the discoveries included, watching everything the “Mosaic” app has to offer adds up to approximately seven-and-a-half hours of programming.

You’ll spot the differences between “Mosaic” the show and the app immediately, as the first scene of the HBO miniseries is a teaser after the murder has already happened, a scene that doesn’t arrive until hours into the app’s content.

From there, the show lays everything out linearly, providing some insight into how Soderbergh weaves viewers back and forth between the story’s timeline. In fact, the very first scene presented in the app doesn’t arrive until 24 minutes into the first episode.

The other differences are mostly cosmetic. Soderbergh uses alternate camera angles and takes of scenes that otherwise got left on the app’s cutting room floor. You’ll even get the “Discovery” clips woven in chronologically rather than how they’re uncovered via the app.

So Which Should I Watch?

If you want to absorb “Mosaic” at your own pace, on the run, and possibly more quickly, the app is the way to go. Individual story segments range from just a few minutes to over a half-hour. And the app is slickly designed such that it’s neat to play around.

But the HBO show offers a far more conventional and accessible entry point into Soderbergh’s twisty drama about truth and perspective. All told, you’re not losing much by sacrificing the ability to “discover” moments within the app, and it’s likely things will make a lot more sense, more quickly and inspire you to keep bingeing.

After 15 years, the A-list cast of "Ocean's Eleven" has remarkably retained their star power. Coming off Oscar noms for "Traffic" and "Erin Brockovich," director Steven Soderbergh chose to make a movie "with no social value whatsoever," but it has proven to have more value than anyone first gave it credit for.  TheWrap has teamed up with IMDb to share 11 enthralling facts about the crime caper.