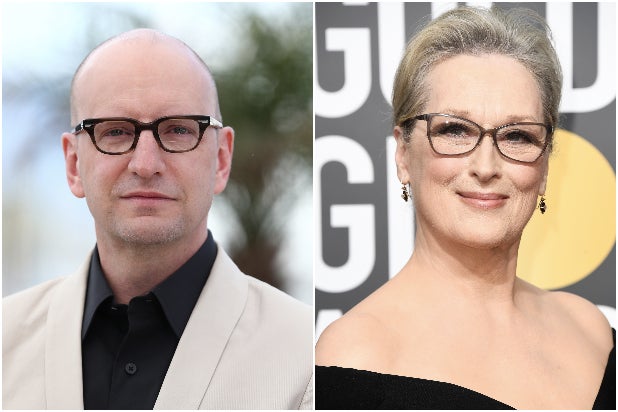 Streep stars in the film alongside Candice Bergen, Dianne Wiest, Lucas Hedges and Gemma Chan, and production on the movie kicked off last week in New York and will continue onboard the Queen Mary 2 as well as in the UK.

Soderbergh is directing the film based on a screenplay by MacArthur Fellow and author Deborah Eisenberg. “Let Them All Talk,” a working title, tells the story of a celebrated author (Streep) who takes a journey with some old friends (Bergen and Wiest) to have some fun and heal old wounds. Her nephew (Hedges) comes along to wrangle the ladies and finds himself involved with a young literary agent (Chan).

“This is the kind of project where you just say yes please sign me up,” Sarah Aubrey, head of original content at HBO Max said in a statement. “To work with Steven Soderbergh and this all-star cast led by Meryl Streep is thrilling and sets the standard for features at HBO Max.”

The film is produced by Gregory Jacobs and executive produced by Ken Meyer and Joseph Malloch.

Thus far, HBO Max, the new streaming service from parent company WarnerMedia, has announced a “Gossip Girl” reboot and a drama series based on Greek myth called “Circe,” but “Let Them All Talk” is among the first feature film projects planned for the service.

Soderbergh is familiar with the streaming space, as his film “High Flying Bird” premiered on Netflix earlier this year. His next movie “The Laundromat” about the Panama Papers is first playing at the Venice Film Festival, followed by another screening at Toronto.