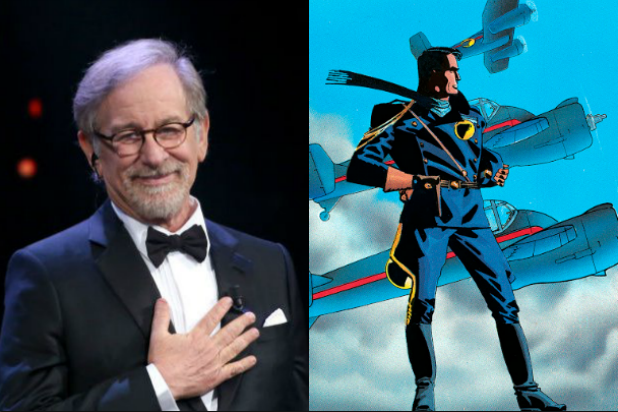 Steven Spielberg and Amblin Entertainment are again teaming up with Warner Bros. Pictures to produce the action adventure “Blackhawk,” based on the DC Comics series of the same name.

The move comes on the heels of “Ready Player One,” also a Spielberg-Amblin-Warner Bros. collaboration, and marks the filmmaker’s first feature centered on DC characters.

Blackhawk is the leader of a small team of ace pilots who fight tyranny and oppression — including Axis powers as well as various supervillains –while operating from a hidden base known only as “Blackhawk Island.” The comic book debuted in 1941 and features team members from around the world, with Blackhawk himself generally portrayed as a Polish freedom fighter.

Blackhawk was created by comics legends Chuck Cuidera, Bob Powell and Will Eisner for Quality Comics. The characters and concepts were sold to DC after Quality ceased publications in 1956.

“We are so proud to be the studio behind Steven Spielberg’s latest hit, and are thrilled to be working with him again on this new action adventure,” said Emmerich on Tuesday. “We can’t wait to see what new ground he will break in introducing ‘Blackhawk’ to movie audiences worldwide.”

The screenplay for “Blackhawk” is being written by David Koepp, who has collaborated with Spielberg on the blockbusters “Jurassic Park,” “The Lost World: Jurassic Park,” “War of the Worlds” and “Indiana Jones and the Kingdom of the Crystal Skull.”

Spielberg will produce the film along with Kristie Macosko Krieger, under the Amblin Entertainment banner, while Sue Kroll will executive produce, under her Kroll & Co. Entertainment shingle.

“It was wonderful working with the team at Warner Bros. to bring ‘Ready Player One’ to the screen,” said Spielberg, adding, “They bring a blend of passion and professionalism to everything they do and have a tremendous history in this genre. I am excited to reunite with them on ‘Blackhawk.'”

Spielberg’s next two films are the fifth installment of the Indiana Jones franchise and “West Side Story.”