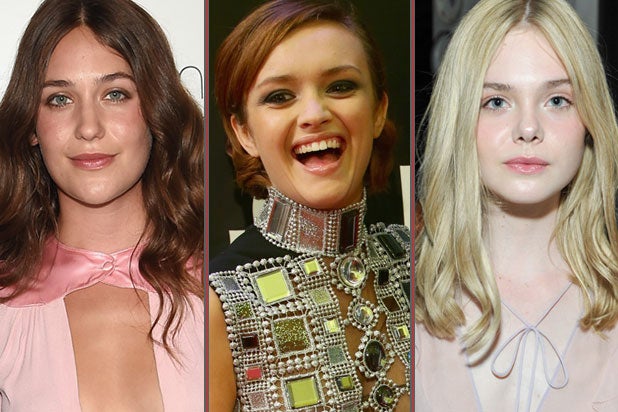 Elle Fanning, “Me and Earl and the Dying Girl” star Olivia Cooke and “Mistress America” breakout Lola Kirke are three of the top contenders for the female lead in Steven Spielberg‘s adaptation of Ernie Cline‘s “Ready Player One,” multiple individuals familiar with the casting situation told TheWrap.

Fanning, Cooke and Kirke will test for the role of Art3mis, the avatar of Samantha Cook within the Oasis, which is the virtual reality universe at the center of the sci-fi story.

Insiders insist it’s early in the casting process and that casting director Ellen Lewis is narrowing the field for Spielberg so he can move quickly once he’s able to turn his attention away from “Bridge of Spies” and “The BFG.” Two other actresses are believed to be on the initial shortlist, though their identities remain a mystery.

Meanwhile, there’s still no word on which young actors are being eyed to play protagonist Wade Watts, an Oasis user who sets off on a series of challenges to win an invaluable prize.

Warner Bros. declined to comment. The studio will release “Ready Player One” on December 15, 2017.

Fanning hasn’t starred in a Spielberg picture yet but he did produce J.J. Abrams‘ “Super 8,” in which she played the female lead. They have also known each other for years, as he directed her sister, Dakota Fanning, in “War of the Worlds.”

Fanning has the most proven track record of the trio. She next stars as a trans teen in “About Ray” and will soon be seen in Jay Roach‘s “Trumbo,” both of which will screen at the Toronto International Film Festival. She recently wrapped Nicolas Winding Refn‘s “Neon Demon” and is also set to co-star in Ben Affleck‘s “Live By Night.”

Cooke stars on “Bates Motel” and drew widespread acclaim for her impressive performance as a young cancer patient in “Me and Earl and the Dying Girl,” which won both the Grand Jury Prize and the Audience Award at Sundance. She has been in demand ever since, and is in the mix for the female lead in Rian Johnson‘s “Star Wars: Episode VIII.” She’ll continue to showcase her range as a teenage prostitute in the indie drama “Katie Says Goodbye.”