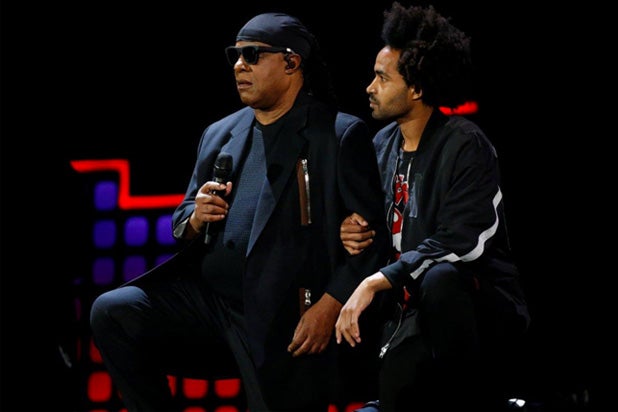 Stevie Wonder began his performance at the Global Citizen Festival concert in New York’s Central Park on Saturday night by announcing that he was “taking a knee for America.”

“Whenever you need to interrupt hate, stand down bigotry, condemn sexism and find love all of our global brothers and sisters everyday,” the legendary R&B singer said from the stage. “Tonight I’m taking a knee for America.”

Wonder’s gesture comes as President Donald Trump has stepped up his criticism of professional athletes like former San Francisco 49ers quarterback Colin Kaepernick who have declined to stand during the national anthem.

In the last day, the president has repeatedly attacked what he called “the total disrespect certain players show to our country” and called on the NFL to fire such players.

Wonder, who is blind, was helped to his knee by an assistant, before announcing to the crowd: “But not just one knee. I’m taking both knees.”

He followed by indicating that his gesture was not merely a form of protest but an act of prayer: “Both knees in prayer for our planet, our future, our leaders of the world and our globe, Amen.”

“I wanted to see that prayer before I serve you my musical meal. Is that OK?” he said, before kicking off his set with “Master Blaster.”

While singing his hit “Signed, Sealed, Delivered” later in his performance, Wonder offered a shout-out to Senator John McCain (R-Arizona) — who had announced on Friday his plan to reject the latest Republican bill to repeal and replace the Affordable Care Act.

“Sing it for Senator McCain,” Wonder said. “It’s about doing the right thing.”

Before singing “Isn’t She Lovely,” he also mentioned Jimmy Kimmel’s infant son, whose heart condition led the ABC late-night host to lead the charge for preserving health care protections for Americans, particularly those with pre-existing conditions.

WATCH: Stevie Wonder takes a knee on the stage "for America" at #GCFest https://t.co/lXIMO8fvcT https://t.co/qE97FFQmMH