It’s not hard to see why someone imagined a stage musical could be made out of “The Sting,” the 1973 Oscar Best Picture winner starring Paul Newman and Robert Redford as Depression-era con artists who pull off the ultimate heist. After all, George Roy Hill’s artfully constructed film leaned heavily on Scott Joplin’s ragtime tunes — providing fodder for many a ’70s-era student-piano recital rendition of “The Entertainer” and “Rose Leaf Rag.”

There’s much to admire in the new stage musical version of “The Sting,” which opened Sunday for a pre-Broadway run at the Paper Mill Playhouse in Millburn, New Jersey — starting with the tap-tastic choreography of Tony winner Warren Carlyle, whose ensemble work is truly showstopping here.

The production has found an emerging star in J. Harrison Ghee as Johnny Hooker, the green hothead con artist that Redford played on screen, even elevating a racial subplot of the film (Redford’s Booker was called a “n-word-lover” for helping a black man on the street) into a front-and-center element of the story. Ghee has a spry energy that suits his impetuous character, and a golden voice to match.

Ghee almost manages to upstage the show’s above-the-marquee star, Harry Connick Jr., as Hooker’s older, wiser con-artist mentor, first played by Newman in the film. Here, his wizard-like character, Gondorff, is introduced as a “piano monkey in a whorehouse” who spends more time tickling the ivories than he does palming cards or picking pockets.

Connick is a wiz at the piano, of course, riffing on Mark Hollman’s deliberately Joplin-esque score on stage, and he also proves to be surprisingly nimble on his feet during dance numbers like the Act 2 curtain-raiser “This Ain’t No Song and Dance.” (He’s also credited with additional music and lyrics.)

The difficulty is that not all of the movie’s virtues have been successfully integrated into the new medium. Hollman (“Urinetown”) serves up mostly jazz-lite pastiche, and the lyrics by longtime collaborator Greg Kotis seldom do much more than advance the plot or bide time till the next dance break. And his rhymes are easier to spot than a novice poker player’s tell.

Also Read: 'Rocktopia' Broadway Review: Beethoven's Not the Only One Rolling Over in This Musical Mashup 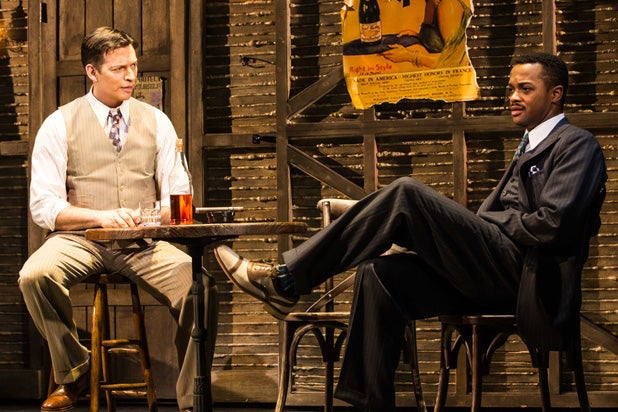 As to the plot: Some of the best lines in Bob Martin’s book are lifted directly from David S. Ward’s original screenplay, and the very structure of musical theater allows us to linger over some of the less felicitous elements of the story.

Take for instance, the women, who were always more like accessories in the original film and again feel like missed opportunities to flesh out parallel romantic subplots. Connick’s brothel-owning buddy and on-again-off-again lover (Kate Shindle) is given a number or two of her own — but not much real agency, or even a duet with Connick’s Gondorff.

The same goes for Janet Dacal’s waitress Loretta, who gets a first-act duet and a second-act torch song but still feels more like an afterthought. When she agrees to invite Hooker into her apartment late in the second act, you can almost feel director John Rando handing notes to Carlyle to find a dance ballet sequence to fill in the gaps in the storytelling.

Martin’s script has the unfortunate habit of protracting unimportant elements of the story — the overlong show could easily lose 20 minutes, including a drawn-out scene in a Western Union office — while passing up chances to explore other aspects of the story that the film gave short shrift.

There’s a moment when Hooker is on the spot, cornered by the feds who want him to turn on his partner in crime. But he hastily and uncharacteristically agrees, without a moment of reflection, or a song to explore the upsides, downsides or consequences of his apparent act of betrayal.

Despite these flaws, “The Sting” still has the power to enchant with its deliberate artifice and syncopated charm. There’s good reason why the film has forever been associated with “The Entertainer.”