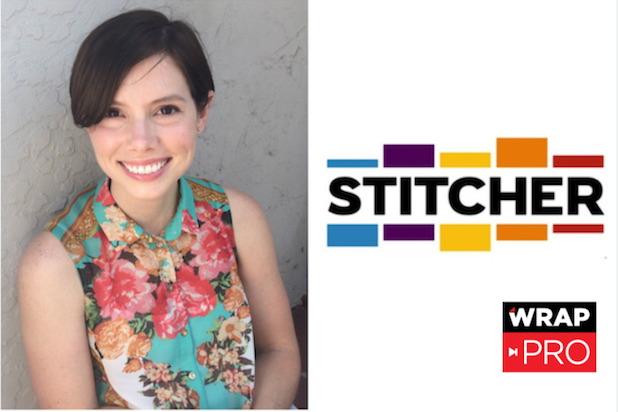 Jenny Radelet Mast knows you listen to podcasts in your car, inching forward in traffic. Or at the gym, while you struggle through a workout. Or while you’re doing chores. So she makes sure Stitcher podcasts like Marvel’s ‘Wolverine: The Long Night’ do everything they can to make you forget all that and focus on an immersive story.

Stitcher, which began in 2008 as an on-demand radio service that hosted other people’s podcasts, now boasts projects like “Wolverine” (which has been renewed for a second season), Vox’s weekday news series “Today Explained” and “Reading Rainbow” star Levar Burton reading short stories.

“Wolverine” has kept audiences listening by using sounds you would hear in the room with the characters to enhance the dialogue. The third episode uses a litany of effects to set a grim, captivating scene: manic clicking, a creaking door, a sloppy sip, the start of a lo-fi Youtube clip. Then a rooster crows and someone draws a knife from a scabbard.

On Friday, January 18, “Wolverine: A Long Night” won best scripted podcast at the first ever iHeart Podcast Awards. Stitcher reported 85.7 million downloads for originals programming in the last year, a sizable jump from 27.5 million downloads the company reported in its first year producing originals in 2017. The company started Stitcher Originals after the company was acquired by E.W. Scripps for $4.5 million.

Also Read: Will Ferrell Is Coming to Podcasts as Ron Burgundy in 2019

Youtubers and Buzzfeed alums Allison Raskin and Gaby Dunn will also release a new podcast entitled “Just Between Us” on March 13, offering advice on topics like “body image, mental health and failure,” according to Stitcher.

Mast joined Stitcher in 2015 first leading content creation for Howl, an early version of what would become the ad-free paid service Stitcher Premium. Mast recently spoke with TheWrap about how to continue the momentum and find and grow the next great podcast.

How has the ongoing flurry of podcasts like “Dirty John” and “Homecoming” being picked up by TV and streaming services impacted your work with original programming?

It’s fantastic to see the interest in podcasting from film and television, and kind of thrilling to see good TV that grew out of podcast IP. The “Homecoming” TV show blew me away. What it does for us is adds more potential value to the work that we’re doing. It’s changing the narrative around what makes a podcast “successful.” And I’d say it’s propelling us to keep taking risks on great stories that we really believe in.

How did you get started with Stitcher?

I started before E.W. Scripps acquired Stitcher. I knew Chris Bannon, the chief content officer, and I knew Gretta Cohn, who was the EP of development. I saw that they were doing really interesting things. I knew they were trying to branch out and develop non-comedy projects. It was our first attempt at paywalled content. It seemed like there was just so much opportunity for creators, so I wanted to get in on the ground floor.

About a year into my career here, that’s when Scripps acquired the Stitcher brand, and we started building on that brand by developing and producing Stitcher Original content.

You came into podcasts after working at Apple Music as executive media producer for Beats 1. What did you apply to your work at Stitcher?

I started my career in audio at KCRW and often would lend my voice to the on-air pledge drives you hear once or twice a year. My mentality around listeners was really about strength in numbers, because such a huge part of my job was to appeal to those listeners en masse for fundraising.

When I switched gears and joined the for-profit podcasting world, I began focusing on listenership as a much more subjective experience. My approach to development and production became much more centered around the listener, singular. Most people are listening to podcasts by themselves, in the car, or on a pair of headphones. Spending time during the development process thinking about the specific person listening, what they want, what makes them return. It has such a significant effect on the material.

What’s your scouting process for finding the right content for Stitcher?

There are so many different ways that a show can be formed. Sometimes, it’s a pitch that we get. Sometimes it’s an idea we have in-house.Those are the two main ways. With the former, it’s a lot about who the person is that’s bringing us this opportunity. Is the creator or host super enthusiastic about podcasting? Given our strengths, is Stitcher Originals uniquely suited to help bring this show to an audience? Are we passionate about the conversations happening on this show? Is this being made for a specific listener we are interested in serving?

What can Stitcher listeners look forward to in 2019?

Our slate in 2019 is just as eclectic and exciting as you’d expect given our track record. Of course, there will be more “Wolverine.” We’ve had so much fun working with Marvel on this series. They are basically produced like mini-movies, without cameras. I’m also really excited to bring our scripted erotica series “Purple Panties by Zane” to a wider audience. Plus, we’re collaborating with some of our favorite creative partners from 2018, like Jonathan Hirsch of “Dear Franklin Jones” and Allison Raskin of “Gossip” for new projects.

What Did NBC, Warner Bros, Ellen DeGeneres and the LA Times Not Get About the #MeToo Movement?
KEEP READING..