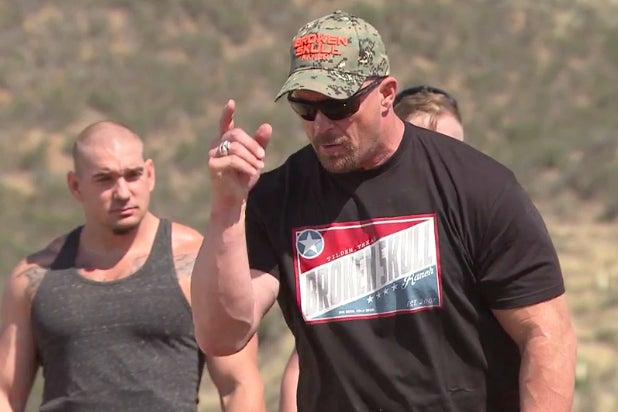 “Broken Skull Challenge is the toughest show on television and you can bet your bottom dollar Season 4 will be totally off the charts,” Austin told TheWrap.

“‘Broken Skull Challenge’ set a new bar for competition series that both inspire and drive its fans,” Jayson Dinsmore, head of development for CMT, added. “The series has certainly earned its rep as the toughest show on television and we can’t wait to see what Steve’s planned for this season.”

On the sophomore season of Pickler’s reality series, fans will be introduced to Kellie and Kyle’s family. Viewers will follow the couple as they navigate some once-in-a lifetime situations including a must-see visit to Japan and go behind the scenes as they prepare for their appearance on “Celebrity Family Feud.”

The “American Idol” alum will also attempt various occupations including re-living her first job as a Sonic waitress, as well as becoming an Uber driver for charity — despite her lack of reputable driving skills and inability to follow directions.

“CMT’s unscripted series mirror the optimism and passion of our fans,” Dinsmore said of his whole slate. “Our shows are smart, spirited and play an important role in attracting new audiences.”

That series’ lead-in, “Dallas Cowboy Cheerleaders: Making The Team,” returns for Season 11 the same evening at 9 p.m. As always, the run will follow a new group of hopefuls who compete to fulfill their lifelong dream of landing a highly coveted spot on the elite Dallas Cowboys Cheerleaders squad.

Melissa Rycroft returns to mentor the new recruits, while Pickler (crossover!) makes a surprise visit to Training Camp to learn some moves and share insight into how she handles being in the spotlight. Fellow Texan and Grammy Award-winner Kacey Musgraves will also stop by to talk to the girls about staying true to themselves, and share her stand-out picks to make the team.

This season features a professional Japanese cheerleader who will battle a language barrier, a single mother who wants to prove to her six-year-old daughter that its never too late to follow your dreams, as well as several “comeback” girls who finally make it into training camp after years of unsuccessful tryouts.

Music's biggest names -- from Carrie Underwood to Pharrell Williams -- headed to the Bridgestone Arena in Nashville, Tennessee, for the fan-voted awards show.