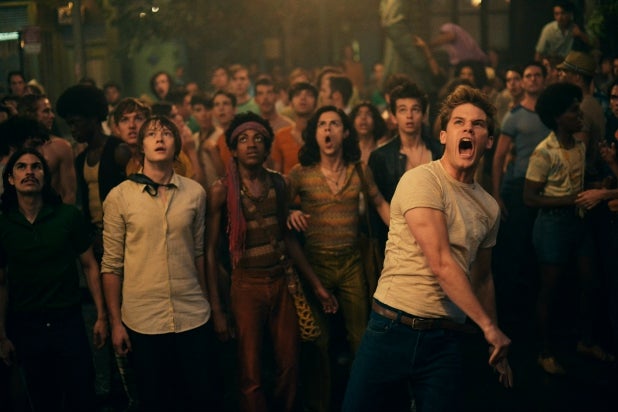 “Stonewall,” a drama based on the 1969 New York police brutality protests that helped launch the gay rights movement, landed with a thud in theaters this weekend.

The independent film grossed a dismal $112,414 from 129 theaters for an anemic $871 per-screen average for distributor Roadside Attractions. It ranked 29th on the list of 30 films tracked by Rentrak this weekend.

The Roland Emmerich-directed drama was the target of a boycott by the Gay-Straight Alliance Network, which accused Emmerich and screenwriter Jon Robin Baitz of misrepresenting the significant role played by LGBT people of color in the protests.

Instead the film’s protagonist is a fictional young, gay, white, Midwestern man (played by British actor Jeremy Irvine) who arrives in Manhattan and becomes a key player in the uprising at the Stonewall Inn in Greenwich Village. Ron Perlman and Jonathan Rhys Meyers co-star.

It’s hard to assess the impact of the boycott, and Roadside executives weren’t commenting Sunday. The controversy could in theory have helped raise awareness about the film, but the opening weekend results suggest the negative publicity hurt its chances of connecting with its core audience.

“Stonewall” was made for a reported $15 million by Emmerich’s Centropolis Entertainment, and was a passion project for the director, who specializes in big-budget studio fare including “Independence Day” and “White House Down.” Like Baitz, Emmerich is openly gay.

The box office prospects for “Stonewall” were never strong. It lacked big stars and a major marketing push. The reviews didn’t help either. The film has a dismal 8 percent positive on Rotten Tomatoes with critics describing it as “dull” and “offensively bad.”