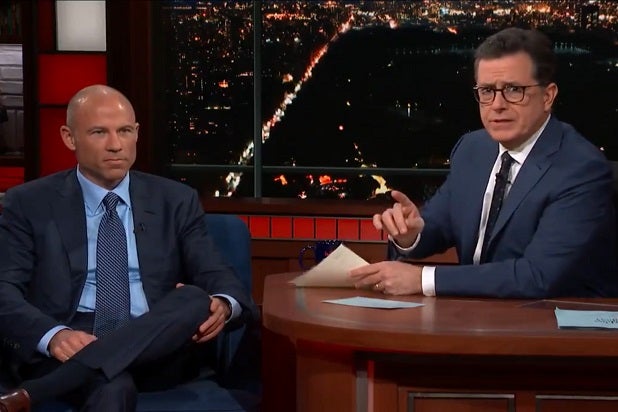 Michael Avenatti, who represents Stormy Daniels in her legal fights with President Trump, says he will reveal new evidence on Wednesday night’s episode of “The Late Show With Stephen Colbert.”

In a preview of the episode, Colbert held up a sheet of paper he described as a “new piece of evidence,” and then asked Avenatti to describe it to the audience. The clip ended there, tantalizingly, before Avenatti delivered his answer.

Daniels, whose real name is Stephanie Clifford, is suing Trump to vacate the nondisclosure agreement she signed in 2016 for $130,000 paid by Trump’s lawyer, Michael Cohen. She is also suing Trump for defamation after he called some of her statements “fraud” on Twitter. A California judge set a July hearing date for the first lawsuit.

Also in the preview released Wednesday afternoon, Avenatti called it “absurd” that Cohen would give $130,000 to Daniels on Trump’s behalf and “never seek reimbursement, never tell [Trump] about it.”

That’s when Colbert pulled out that mysterious sheet of paper.

This isn’t the first time Avenatti has hinted at what evidence he may hold. Before Daniels’ “60 Minutes” in March, we tweeted a cryptic image of a disc. We still don’t know what, if anything, it contains.

Watch the Colbert exchange below — and tune in to “The Late Show” tonight to see if Avenatti has the goods.

TONIGHT: @MichaelAvenatti, attorney for #StormyDaniels, gives @StephenAtHome the exclusive on new evidence in one of his cases concerning the President. #LSSC pic.twitter.com/8QzO4BcDKo