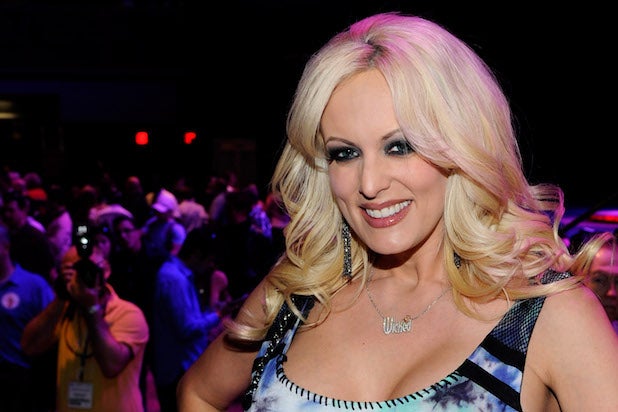 President Trump’s lawyers have threatened Stormy Daniels with a $20 million lawsuit in advance of her “60 Minutes” interview.

The adult film star, who gained worldwide notoriety following reports that she had an affair with Donald Trump years ago, slammed her critic Tuesday, as she hurled some interesting tid-bits about her relationship with the president. And boy, can she throw serious shade.

Responding to a tweet suggesting Daniels should “just disappear,” because “no one cares you were a slut and slept with POTUS 12 yrs ago,” Daniels gave an epic clapback:

“Technically I didn’t sleep with the POTUS 12 years ago. There was no sleeping (hehe) and he was just a goofy reality TV star.”

When another critic told her that her 15 minutes were almost up, Daniels — whose legal name is Stephanie Clifford —  responded with this:

“Do you seriously think I give a flying f— if people “like” me?” I’d have become a kindergarten teacher if that was my goal in life.”

Daniels is embroiled in a fierce legal battle with Trump and his lawyers over a non-disclosure agreement she signed right before the 2016 presidential election, aimed at silencing her about her relationship with the president before he took office.

Through her lawyers, Daniels claimed that the NDA — for which she was paid $130,000 — is null and void because Trump never signed it.

Trump has denied the accusations. His personal lawyer, Michael Cohen, filed papers with in Federal Court, claiming he has the right to seek $20 million in damages for at least 20 violations of the nondisclosure agreement.

But if Daniels is worried, you wouldn’t know it by looking at her Twitter feed, where’s she’s spilling lots of Trump tea.

Responding to an online critic who asked whether she had “no shame,” Daniels said: “Shameless….which is also my favorite Garth Brooks song.”

When a particularly spelling-challenged critic tried to diss her, saying “all americans know you will do anything for money and you are so jellioys of milania you cant stand it,” Daniels responded with: “Too easy.”

It seems Daniels is well aware of her trolling talents.

To a fan who wrote: “I know you’re technically an adult film star, but you’re a hell of a troll slayer too!,” Daniels hit back with this gem: “Everyone needs a hobby.”

You can check out more of her tweets here (NSFW).

If the drama has you glued to the screen, worry not. Daniels promised in her Tuesday Twitter storm: “I am NOT going anywhere.”

Do you seriously think I give a flying fuck if people "like" me? I'd have become a kindergarten teacher if that was my goal in life. And for someone who doesn't want to "see" me, you took the time to come to my twitter and type a message to me? OK https://t.co/McrN8E8aCC