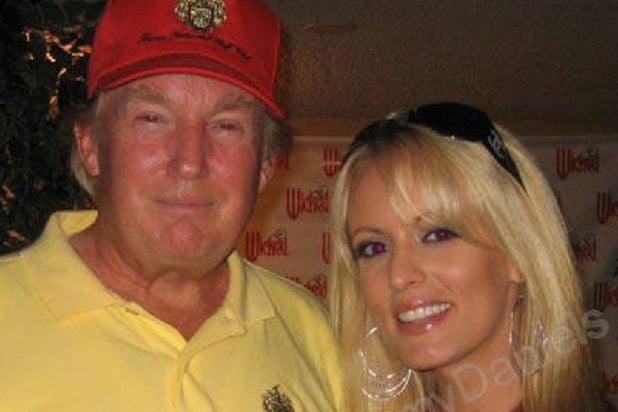 According to the suit, Daniels was presented with a “Hush Agreement” referring to Daniels — whose real name is Stephanie Clifford — as “Peggy Peterson” or “PP” and Trump as “David Dennison” or “DD.”

“Importantly, the Hush Agreement imposed various conditions and obligations not only on Ms. Clifford, but also on Mr. Trump. The agreement also required the signature of all parties in the agreement, including that of Mr. Trump,” the suit reads. “Moreover, as is customary, it was widely understood at all times that unless all of the parties signed the documents as required, the Hush Agreement, together with all of its terms and conditions, was null and void.”

Also Read: Jimmy Kimmel Says Trump Would Love 'Shape of Water': 'It's About a Monster That Has Sex with a Woman Who Can't Talk About It' (Video)

However, the suit says, days before the election, Daniels and Cohen signed the agreement, Trump didn’t.

TheWrap has reached out to the White House for comment on the lawsuit.

The suit says that, despite the lack of Trump’s signature, $130,000 was wired to Daniels.

Cohen has acknowledged the payment, but maintained that it was made from his personal funds, and that the Trump campaign and the Trump Organization were not parties to the transaction.

The suit contends that efforts to silence Daniels have continued unabated, and that in February of this year Cohen “surreptitiously initiated a bogus arbitration proceeding against Ms. Clifford in Los Angeles. Remarkably, he did so without even providing Ms. Clifford with notice of the proceeding and basic due process.”

“Put simply, considerable steps have been taken by Mr. Cohen in the last week to silence Ms. Clifford through the use of an improper and procedurally defective arbitration proceeding hidden from public view,” the suit reads. “The extent of Mr. Trump’s involvement in these efforts is presently unknown, but it strains credibility to conclude that Mr. Cohen is acting on his own accord without the express approval and knowledge of his client Mr. Trump.”