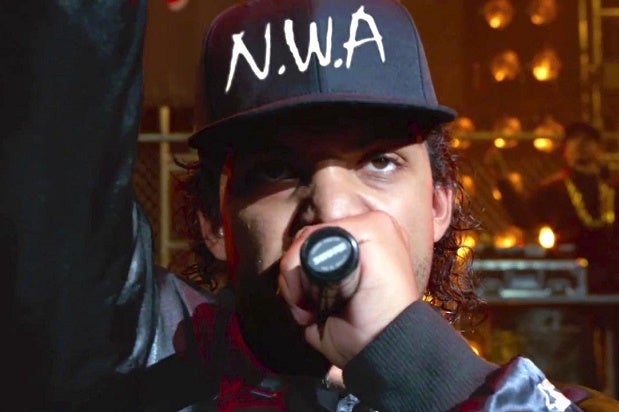 “Straight Outta Compton” blasted past analysts’ estimates with $24.2 million at Friday’s box office, and is on its way to a record-breaking $57 million weekend for Universal Pictures.

The weekend race is already a blowout. “The Man From U.N.C.L.E.” debuted with roughly $5 million on Friday, and is heading for third place with a limp $13 million, behind two-time champ “Mission: Impossible – Rogue Nation,” the Tom Cruise thriller that was second and on its way to $17 million in its third week.

“Straight Outta Compton,” the R-rated biopic about the iconic “gangsta rap” group N.W.A., is on track for one of the biggest August and R-rated openings ever. Even better for Universal, it will be the studio’s sixth film to hit No. 1 in what has been an incredible year for the company that released blockbusters including “Jurassic World,” “Pitch Perfect 2” and “Furious 7.”

Universal celebrated passing the $2 billion mark at the domestic box office in record time on Saturday, overtaking the speed record previously held by Warner Bros., which reached $2 billion on Dec. 25, 2009. The studio is also poised to cross the all-time domestic record later this year — also set by Warner Bros. in 2009 ($2.1 billion). Universal last week broke the record for the highest-grossing box office year in Hollywood history when it reached $5.53 billion worldwide.

The Friday opening for “Straight Outta Compton” — which included $4.9 million from Thursday screenings — was the fourth-largest August first day ever, behind only “Teenage Mutant Ninja Turtles,” “The Bourne Ultimatum” and “Guardians of the Galaxy.” It’s on track for the biggest opening for a rap or hip-hop movie ever, ahead of the $51 million 2002 debut of Eminem’s “8 Mile.”

Moviegoers gave “Straight Outta Compton” an “A” CinemaScore, in line with the high marks critics have given the film, which recounts the rise of the what was known then as “the world’s most dangerous group.” An in-your-face style that challenged authority with profane hits like “F–k Tha Police” put the group on the front lines of the 1980s cultural wars in America.

Warner Bros. had hoped for more from the Guy Ritchie-directed “The Man From U.N.C.L.E.,” an action film starring “Superman” actor Henry Cavill and Armie Hammer based on the 1970s TV show of the same name. Analysts had projected a debut in the high-teen millions. It received a “B” CinemaScore from audiences, in lines with the critics, who gave it a 68 percent “fresh” rating on Rotten Tomatoes.

Things didn’t get much better for “The Fantastic Four.” The Marvel superhero reboot from Fox took a whopping 78 percent drop from its first Friday and was headed for an $8 million second weekend and fourth place after disappointing in its debut.