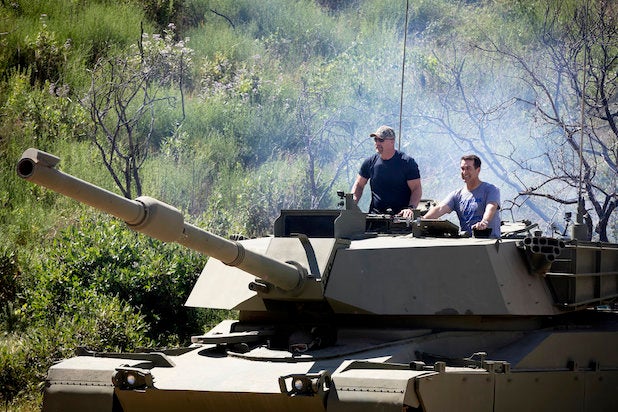 Straight up, “Stone Cold” Steve Austin is stoked for his new USA Network series “Straight Up Steve Austin.” Interviewing the WWE legend and former “Broken Skull Challenge” host, you could hear the excitement in his (gravely) voice.

“It was fun because with my podcast usually I’m sitting here or right next door in my studio, and it’s just me one-on-one with the guest and I just have a very simple recording set up: two microphones, and it’s just us,” the Texas Rattlesnake told TheWrap. “[On the new TV show], you’ve got some really cool people coming out, we have different activities lined up, and you’ve got a crew of about 85 people filming all this. So it’s way different — it’s my podcast magnified a thousand times.”

There will be “a lot coming at ya” when this one premieres, Austin promised. Sounds like it.

On the subject of his popular podcast, Austin, who seems to do as much talking these days as he did in his WWE wrestling days, isn’t running his mouth as much on his Marina Del Rey-based “The Steve Austin Show.” That’s because the PodcastOne show is down to one original per week, with a “classic” episode from the archives taking the second slot. We asked Austin if the halving of original weekly episodes should be taken as a sign that he’s tapering off that particular medium, which has given wrestling fans plenty of access to the man who would inarguably be on sports entertainment’s Mount Rushmore. Hell, the former Hollywood Blonde records it at his house about 18 miles from Hollywood.

“You know, the way that happened — a while back when I was filming [‘Broken Skull Challenge’], doing two podcasts a week was one thing,” he said. “But when you roll into production on another show, to really properly put in the homework and do the time you need to do to properly interview someone…it’s just too time-consuming.”

“I took about a six-month break, because I needed one really. And when I came back I said I’d really like to do one a week, that way I can do my due diligence,” Austin continued. “PodcastOne has decided to keep playing the classics — I’m fine with that, people still enjoy listening to some of those.”

“I’ve found that just doing one a week…I think I listen better now than I did back in the day,” he said. “I think anything you do, the more reps you get, you improve. So I enjoy doing one podcast a week versus two because I can be better and my guests deserve that.”

So Steve’s got a few balls (beers?) in the air to juggle — but what about his last television show, “Broken Skull Challenge”? Is there any potential comeback for the CMT competition series, which went off the cable airwaves in 2017?

“I really don’t have an answer to that,” Austin said. “The rocket scientists that canceled that show, I don’t know how that happened. With literally no money to spend on advertising, that show performed and it always did good numbers on repeats. But anyways, that is what it is. I always enjoyed that show.”

Enjoy his new show “Straight Up Steve Austin” when it debuts Monday, Aug. 12 at 11/10c on USA Network, immediately following WWE’s flagship wrestling show, “Raw.” He used to be a big part of that one, in case you don’t know your WWF/WWE history.