Do you want David Harbour to win a Golden Globe or do you want Joe Keery to keep his gorgeous mane of hair? Because you can’t have both, apparently.

Harbour (who plays police chief Jim Hopper in “Stranger Things”) took to Instagram on Monday after being nominated for a Globe for Best Supporting Actor to share how grateful he was for the nod. Keery was among the many who chimed in via the comments section. But his remark kinda stole Harbour’s thunder, as the actor (who plays hunk Steve in the Netflix series) made a vow that devastated fans.

“If you win David the Duffer’s [sic] get to shave my head,” Keery wrote.

Every “Stranger Things” buff knows that Keery’s hair is iconic at this point and if he were to rid himself of his luscious locks, then Steve may lose what makes him the coolest guy in Hawkins, Indiana. After all a ‘do that perfect — which can only be achieved with a precise mixture of Fabergé Organic shampoo and conditioner and Farrah Fawcett hairspray — is a character unto itself.

Chances are Keery won’t actually be able to shave his head, seeing as “Stranger Things” is coming back for a third season and the show, let alone fans, wouldn’t hear of it. But, if Harbour wins you’re in store for at least one treat: he’s vowed to do that dance if he grabs a Globe.

You can see Keery’s “promise” below — even if you may not want to.

Also Read: How Much Binge-Watching These TV Shows Adds to Your Electric Bill, From 'Game of Thrones' to 'Westworld' 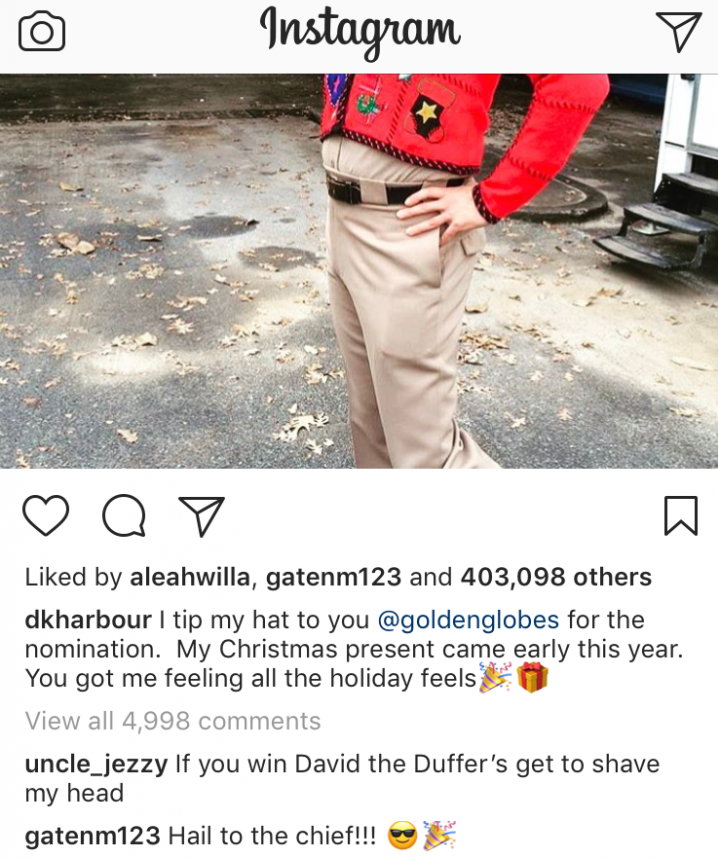