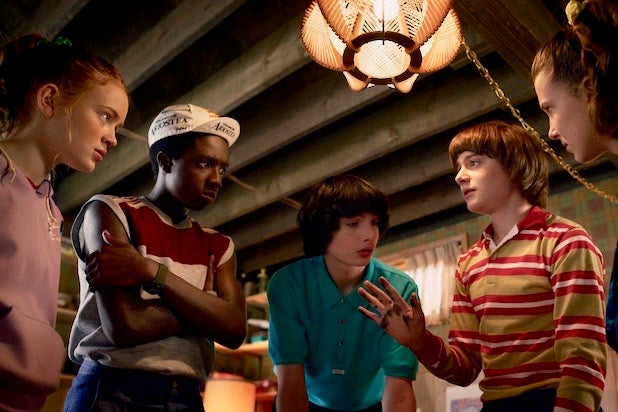 And you thought the Demogorgon and Mind Flayer were scary. Yeah, turns out you ain’t seen nothin’ yet, because “Stranger Things” stars Sadie Sink and Caleb McLaughlin tell TheWrap the Season 3 monster — which fans will be introduced to when the eight-episode “Stranger Things 3” drops at midnight — is definitely the baddest creature Hawkins has seen so far.

“I would say it’s our biggest monster yet… especially with what it can do in the show,” McLaughlin told TheWrap, with Sink adding, “Yeah, definitely the biggest yet. I think the scariest, too.”

“It kind of looks like a combination of the Demogorgon and the Mind Flayer, with like the teeth and everything.” Sink said, noting fans should look closely at the trailer to get a sneak peek at the creature Max (Sink), Lucas (McLaughlin), Eleven (Millie Bobby Brown), Mike (Finn Wolfhard), Will (Noah Schnapp) and Dustin (Gaten Matarazzo) will encounter on the Netflix series’ third season.

Though fans will know just how horrifying this unnamed creature is the moment they see it, Sink and McLaughlin told TheWrap they did not have the luxury of knowing what it looked like the entire time they were shooting.

“When we were filming it, we had no idea,” Sink said, laughing. “There was a man in a jumpsuit with a silver ball on his head and that’s what we had to react to,” McLaughlin added.

“I knew we had to be scared, but looking back, when I finally saw it, I was like, ‘Oh wow, I didn’t realize it was that scary,'” Sink said.

Despite the scary big bad coming for the gang this year, Sink says “Stranger Things 3” is actually “more bright and fun” than the previous two seasons of the Duffer Brothers-created series. And part of that is due to the “fun” romance between Max and Lucas.

“So Mike and Eleven have that very romantic relationship, the kind of relationships you see on TV and film that are super amped up,” Sink said. “And then ours is like a realistic relationship.”

“We don’t need to be around each other all the time,” McLaughlin added. “We appreciate each other’s company, but we also appreciate distance (laughs).”

Hopefully, they get some distance from that monster, too.