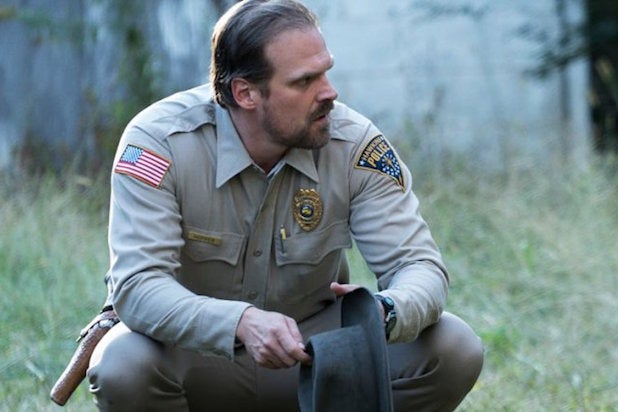 “We have Sean Astin… he’s Winona’s new boyfriend–much to the chagrin to the Chief of Police,” Harbour said during a Fan2Sea Comic Con panel, via Hollywood Life.

We previously knew that Astin would play a former classmate of both Hopper and Joyce (Ryder), but this is the first time we know the nature of his relationship with latter.

But the biggest question: Will there be justice for Barb, Nancy’s friend who was killed in the Upside Down early in the season and then basically forgotten?

“The question and the feelings that Nancy has that no one ever cares about her friend Barb are very much present in the beginning of the season,” Harbour said.

Most of the main cast will be returning for Season 2, with Harbour and Ryder being joined by Gaten Matarazzo (Dustin), Finn Wolfhard (Mike Wheeler), Caleb McLaughlin (Lucas) and Millie Bobby Brown, who plays the specially gifted Eleven.

TheWrap’s Best & Worst 2016: Who did Negan kill? Will Daya shoot Humphrey? Is Michael really dead? and more questions TV shows left their fans with this year

Deaths, revelations, mysteries and questions abounded as TV characters and fans were left hanging for months at a time. Here are some of our favorites.