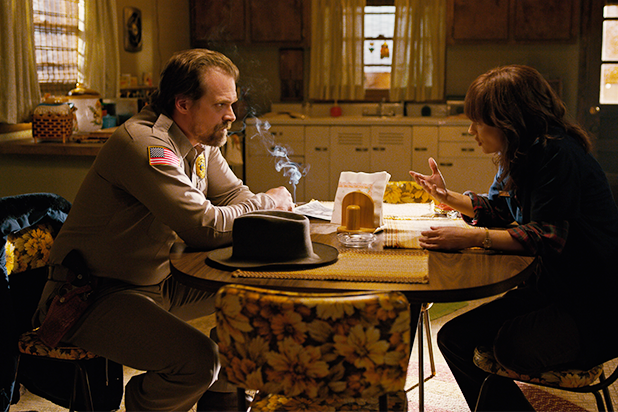 You’re not the only one hoping that Jim Hopper (David Harbour) and Joyce Byers (Winona Ryder) might get together in “Stranger Things” Season 3. David Harbour does as well.

“I would love to see that,” Harbour told TheWrap when we asked about the possibility of the two characters striking up a relationship. “That would be a nice thing, wouldn’t it?”

Harbour, who earned his second Emmy nomination this summer for the role of the Hawkins, Indiana, police chief, said that the idea of bringing a “happy, nuclear family” into the sleepy town is an interesting one — but he’s not making any promises.

“Look, I mean I think the Duffers, in their essence, are, like, Dickensians,” he said, referring to series creators Matt and Ross Duffer.

“You read Charles Dickens, right, and every happiness ending in any of his books are like the family sitting around the turkey, like having like Christmas Dinner,” Harbour explained. “Scrooge is like happy now, and he has a family. I feel like the Duffers have a little bit of that same mentality, so I think the idea of getting a happy, nuclear family for this group of people might be a really interesting direction to take them.”

While careful to avoid revealing any spoilers, Harbour said that Hopper’s vulnerable side might be explored in the upcoming Season 3.

“We’ve seen [Hopper] sort of struggle with his purpose for living,” he said. “In Season 1, we’ve seen him struggle with fatherhood and his limitations with control in Season 2. And so it, you know, it might be a very interesting place to take him, to see who he is as a man in romantic situations and in terms of this vulnerability that I think he has that he hates about himself.”

“I mean there’s so much rich things to mine there, and I think that you’ll be happy in Season 3 to see that… we take him to some of those places,” he added, joking that giving any more away might risk him his job. “That’s all I could say, otherwise Netflix is going to come to my house and kill me. I always, every interview, this video, I guarantee will say, the title will be David Harbour Spoils All of Season 3. And I’m sorry, Netflix, don’t fire me, please, I just get so excited about the show!”

“Stranger Things” Season 3 will (probably) arrive on Netflix in 2019. To watch Harbour’s interview and read the Down to the Wire Emmy magazine story, head over here.