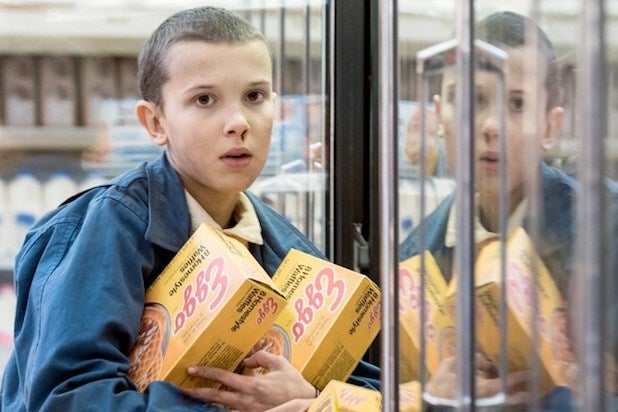 You all remember the scene. In one episode of “Stranger Things,” Eleven, played by Millie Bobby Brown, walks into a grocery store filthy, lost and afraid. Everyone in the store is staring at this little girl, which scares her even more. She determinedly marches to the frozen food section and grabs several boxes of Eggo Waffles. When the clerk tries to stop her, she uses her mind powers to slam the sliding glass doors on him, which shatter behind her as she walks away.

This scene is so cool it inadvertently brought a lot of ’80s and ’90s kids out of the woodwork to rekindle their love affair with the toaster breakfast snack. It even spawned a “Leggo my Eggo” meme adorned with Eleven’s piercing, menacing stare.

And yet Brown, the 13-year-old actress who plays Eleven and single-handedly made the brand popular again, isn’t exactly a fan.

“No, I like them, they’re cool. They’re OK I guess,” Brown said in a phone interview with TheWrap. “I’m not a breakfast person.”

Brown said she’s had them, but wouldn’t eat Eggo normally. But if she had to choose what her favorite breakfast dish was?

Brown is nominated for an Emmy in the Best Supporting Actress category for her work on “Stranger Things,” but if she gets on that stage, it’ll be because of her trendy breakfast option.

“I’m going to be eating it before the Emmys,” Brown said. “Hopefully something will come of that. And if I win, I’m going to thank my avocado toast on stage!”