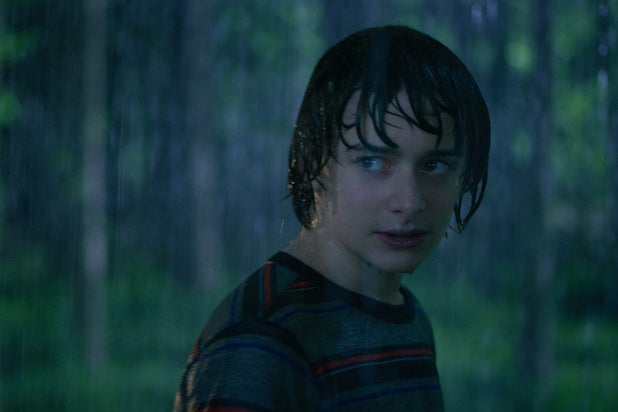 (Warning: This post contains spoilers through the finale of “Stranger Things 3”)

With a single line in a scene about Dungeons & Dragons and a hurt look on Will Byers’ face, the third season of The Duffer Brothers’ “Stranger Things” sparked conversation among fans about whether or not Noah Schnapp’s character is gay.

“It’s really up to interpretation,” 14-year-old Schnapp told TheWrap. “While all the characters were out developing and growing up, Will was in the Upside Down and he was alone there, not interacting with or connected to his friends or the rest of the world. And when he got back, he expected everything to just go back to how it was before, how it was when he was normal and when he was a kid and he wanted to go back to the basement and play D&D.”

Will spends the better part of the first half of “Stranger Things 3” trying to get his buddies to play Dungeons & Dragons with him as they each whine and complain about their respective romantic relationships.

He reaches his breaking point in Episode 303, “The Case of the Missing Life Guard,” when Mike (Finn Wolfhard) and Lucas (Caleb McLaughlin) won’t stop talking about their respective breakups with Eleven (Millie Bobby Brown) and Max (Sadie Sink) during a game of D&D. Will storms out of the Wheeler’s basement into the rain, where Mike tells him he wouldn’t understand the situation.

“It’s not my fault you don’t like girls,” Mike says to his best friend.

The look on Will’s face before he takes his bike and rides home after exchanging a few more unpleasant words with Mike has some viewers wondering if the scene hints at the character’s sexual orientation — or if Will really is just really hurt that his friends have chosen their love lives over their D&D party.

“All his friends have girlfriends and they’re out dating, and he just wants to have fun with his friends,” Schnapp said. “You see in Episode 3, he just wants to play D&D in the basement, and now all of his friends have girlfriends and they are dating. And it’s kind of, when you hear Mike say that line, it’s really up to the audience to interpret it. I kind of just interpret it like he’s not ready to grow up and he doesn’t really want to move on to dating and relationships yet. He still wants to be a kid and play in the basement like he did in old times.”

All this angst, whatever it was truly stemming from, led Will to destroy Castle Byers, his childhood playhouse filled with memories of his times with Lucas, Mike and Dustin (Gaten Matarazzo). That particular scene was an emotional one for Schnapp, and not super easy to shoot.

“With that scene, it was all fake rain, we did it in the middle of the night,” he said. “And I’ve always wanted to shoot a scene in the middle of fake rain and it was my chance! I had a lot of fun doing it. It was freezing and we did so many takes, but it was really exciting. It was a lot of fun. I literally got to destroy something with a bat as many times as a I wanted and just go all out and it was so cool. It was very emotional and I was crying a lot that night. But it turned out well I hope and I’m happy with it. And I definitely would never get to do that in real life, so I’m glad I got to do that.”

Obviously, Will and his friends soon made up so they could all team up to take down the Mind Flayer and shut the gate to the Upside Down (for real this time). But Schnapp has “no information” regarding what happens next, if Netflix orders a Season 4 — including where Will and the Byers are moving with Eleven and if that post-credits scene means Hopper (David Harbour) is still alive.

“I wish I knew! I really don’t know,” Schnapp said. “First of all the ending was amazing… I hope his death was not real and Hopper is still there. But I loved it. It was really sad. But I can’t tell you what’s going to happen cause I don’t know. I’m excited to see where it goes next season. And we’re still figuring out, if there is another season, where we would film and stuff.”