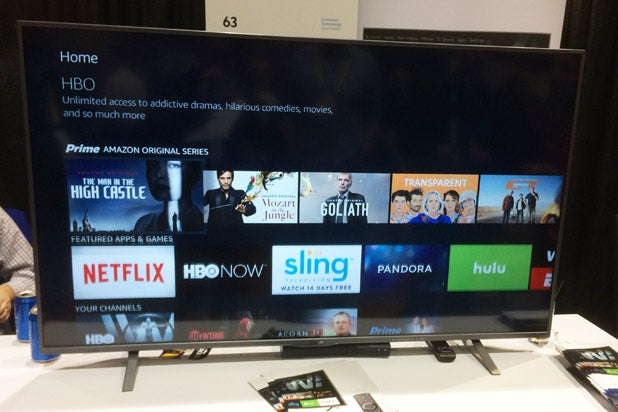 While some virtual reality pioneers at CES Asia believe the immersive technology could take some business away from movie theaters, streaming services are already applying that pressure.

“Netflix and chill” has become the new default date night activity, and even in China, where the home of “House of Cards” is not (yet) available, over-the-top internet TV services like Alibaba-owned Youku Tudou, with its more than 30 million subscribers, have captivated the smartphone-addicted younger generation with their convenience

Sum Huang, the co-founder and chief financial officer of streaming company XG Entertainment, said the budgets for shows going to streaming services have increased six-fold over the last three years.

“Streaming players will pay 2.5 times to 3 times the money TV buyers will pay for shows,” he said. “That has created a huge market.”

“We keep trying to change our demographics,” she said. “Our strategy now is to acquire more [paying] subscribers.”

Streaming may be a more efficient — and cost-effective — way to distribute content worldwide, but it has caught fire in China more than almost any other country, owing to its size of the market and lack of a real broadcast or cable-TV tradition.

“People just don’t have time to go to theaters,” Zhang said in a in a keynote conversation Thursday with United Talent Agency Head of Asian Business Development Max Michael. “But I have time when I go relax on my sofa and turn on my smart TV. Or the young kids, they can run around with their smartphone and watch a movie or a show. For us, the most important question is why do you make content and knowing what is the best time and best place for them to watch. That has to come with data.”

Also Read: CES Asia: The Robots Are Coming - To Catch Your Fish, Served Your Meal, Collect Your Garbage

Zhang’s Le Vision Pictures, a subsidiary of (recently financially challenged) tech conglomerate LeEco, is positioning itself as an internet-first studio that uses data to determine when, where and how to distribute its content.

Since Le Vision is part of a company that manufacturers hardware from smart TVs and smartphones and also operates a streaming service, LeTV, Le Vision Entertainment President Adam Goodman said his company could be flexible about where its content ends up, which isn’t necessarily the big screen.

“We’re really trying to make the creation of our product integrated with our audience in the production stage of it,” said Goodman, a former president of Paramount Pictures and DreamWorks Entertainment. (TheWrap was the first to report Goodman’s role at Le Vision in August.)

He said Le Vision’s strategy is to test movies with audiences after 20 days of production before reworking them for theaters — or not. “We’re making a movie for the internet. Only if the movie is strong enough do we continue to invest in it to go to the big screen.”

And that digital-first workflow is very different to Hollywood’s, where studios have distinct pre- and postproduction phases just as they did when movies were shot on celluloid film. That approach gives studio vet Goodman some pause when looking at the future of the movie business.

Goodman bemoaned Hollywood’s glacial pace in embracing new technology, which is one factor that drew him to Le Vision. “Technology is such a huge part of what we do and we’re always too slow to embrace it,” he said.

“You walk through the floor of a show like this and you realize content is the key for all this great innovation and product,” Goodman said. “It needs storytelling running into its system. I have no concerns about the value of content, but I have great concern about the way the content is consumed.”

Zhang, who studied film in the U.S. and previously founded traditional studio Enlight, said he started Le Vision when he “realized the future of the content business is internet-plus.” He also said leveraging user data can prevent content companies from essentially carpet-bombing potential viewers with TV spots and billboards, which use a massive, expensive net to catch a handful of fish.

“The content industry is wasting so much money,” Zhang said. “Whatever billboard down the street, advertisement you put on television, probably 75 percent of the money is being wasted, if not more. It’s a big issue. We have to control our desires. Less is more. If we can really market our movie toward the true audience, use our data, we can save a lot of money.”