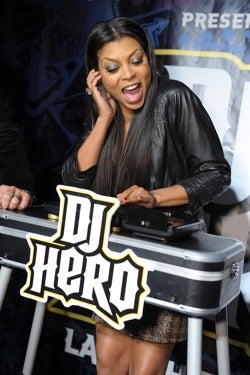 Despite a tidal wave of famous U2 fans backstage at the Rose Bowl on Sunday night — stars like Barbara Streisand, Ben Stiller, Pierce Brosnan, Irish confederates like Colin Farrell, and even suits like Tom Freston and Joel Silver – it seemed none of the stars took Monday night off to recover.

Over on Sunset the music kept going. Activision and Best Buy Musical Instruments counted down to the midnight launch of the next chapter of the multi-hundred million dollar “guitar hero” video franchise — "DJ Hero." Pioneering hip-hop personalities DJ Jazzy Jeff and Public Enemy, who show off their tunes in the game, came to life on stage for the industry-heavy crowd. 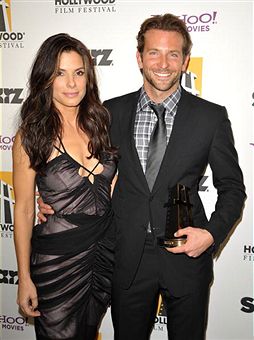 After taste testing the game vs. Best Buy’s actual DJ equipment set up side by side, actors-come-DJ’s Danny Masterson and Caroline D’Amore told friends “it’s exactly the same (as real life).” Before hosting next week’s Soul Train Awards with Terence Howard, Taraji Henson (pictured at left; WireImage), learned to mix and scratch before heading over to the night’s other big carpet. 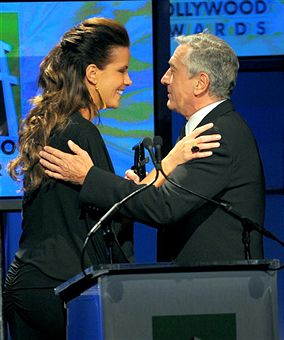 For this year’s class of Oscar hopefuls eyeing a March date at the Kodak, or even a free dinner at the Globes in January, actors Hilary Swank (“Amelia”) and Christoph Waltz (“Inglorious Basterds”) scouted out the stage and practiced podium talking points at the Beverly Hilton Monday night.
Although many of the movies awarded haven’t been released yet, and the universe of voters is somewhat murky, the industry can’t resist early momentum. (At left, De Niro accepts an award for December’s “Everybody’s Fine” from Kate Beckinsale; Getty Images.) Two days earlier on the same stage, last season’s Oscar nominee Viola Davis hosted Amber Valleta and 400 others for the Annual Friendly House Luncheon, benefitting the oldest home for women in recovery in the country.