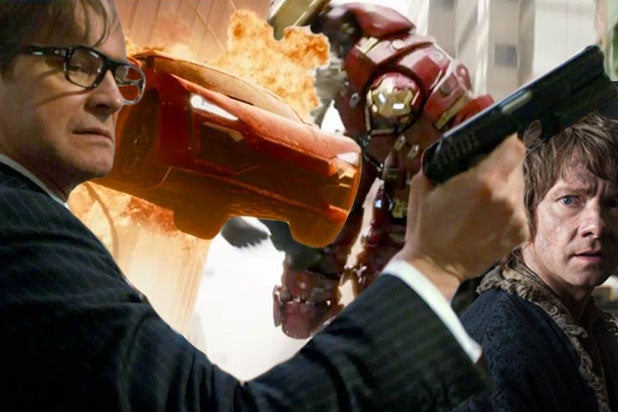 “Avengers: The Age of Ultron” opened at No. 1 in all 88 foreign markets and took in an impressive $168 million at the overseas box office this weekend. It would be even more impressive if it were worth that in real money to Disney.

It’s not, because when those returns in local currencies come back to the studio and are exchanged for the very strong U.S. dollar — up 13 percent over the Euro this year alone — they’re worth significantly less.

The dynamic dollar is a sign that the U.S. economy is gaining strength, which drives employment here, brings better returns on government bonds and lowers prices on imported goods for American consumers — but it’s turning into a major pain for Hollywood. The unfavorable return rate has an impact on foreign grosses taken in by all U.S. films released abroad, but is most pronounced as the returns rise.

It will be felt on Tuesday when Disney reports results for its fiscal second quarter, in which “Cinderella” brought in $300 million in overseas grosses, and in the next quarter with “Age of Ultron.” And the same will be true for the studios behind some of the biggest recent blockbusters, including Universal’s “Furious 7,” Warner Bros.’ “The Hobbit: Battle of the Five Armies” and Fox’s “Kingsman: The Secret Service”.

Also Read: 'Avengers: Age of Ultron' Soars to $188 Million but Record Bid Is Knocked Out

The degree of the blow to a film varies with each territory and local currency, but in terms of the exchange rate, it’s been mostly bad news for the studios. The dollar has risen 16 percent against the Japanese yen since mid-2014 and was at an eight-year high last month. It’s at a 12-year high against the Euro, is up around 18 percent in Brazil and is even worse in Russia.

“Age of Ultron,” which rolled up $439 million at the international box office in 12 days of release, offers a good example of the impact.

Universal’s blockbuster hot car sequel “Furious 7” has been a monster overseas, drawing roughly 77 percent of its $1.42 billion in worldwide grosses from abroad.

For comparison’s sake, let’s look at the return rates of “Furious 7”and those of “Fast and Furious 6,” which rolled up roughly $550 million overseas in 2013. Applying the same exchange rate-based multiple that “Fast and Furious 6” saw, the $1.20 billion that “Furious 7” has grossed overseas this year would be more like $1.54 — a 22-percent difference.

On the bright side for Universal, Asian currencies have not shifted to the same degree, and that will help “Furious 7.” Its highest-grossing market — topping even the U.S. —  has been China, where it has taken in more than $380 million.

Warner Bros. probably lost about 12 to 14 percent of what it would have made overseas a couple of years ago on the finale to Peter Jackson’s Middle Earth franchise “The Hobbit: The Battle of the Five Armies,” which nonetheless brought in $700 million after coming out last December.

“It sucks,” is how Fox distribution president Chris Aronson  succinctly put it, and unfortunately the numbers bear him out.

Fox had a hit earlier this year with “Kingsman: The Secret Service,” which took in $275 million overseas, or roughly 70 percent of its box office. Between the devaluation of the Euro and Russia’s ruble alone, “Kingsman” is off by probably $20 million to $25 million. Add the other currency declines, and the variance in its overall gross could be as high as $40 million.

Lower costs on marketing their films in those countries help the studios a little, but don’t come close to offsetting the losses.

“There’s really not much you can do, other than focusing on putting more people into the seats,” said Hollis. Neither he nor any of the distribution executives attempt to work around the problem by hitting particular markets at particular times, because it’s too unpredictable.

“As much as you want to hang on to every dollar, you remind yourself that moviegoers having good experiences is just as important a measure of success in the long run.

“That, and the fact that the rates are going to swing back the other way at some point in the future,” he said.

Propelled by the May 1 holiday, “Furious 7” brought in $31 million and stayed No. 1 in its third weekend in China, where its $381 million make it the highest-grossing film there ever. Overall, it brought in $52.8 million from 67 territories this weekend and passed “Harry Potter and the Deathly Hallows Part 2” to become the fourth-highest-grossing film of all time worldwide. The three films above it are “Avatar” ($2.8 billion), “Titanic ” ($2.2 billion) and “The Avengers” ($1.5 billion).

Elsewhere, Will Smith‘s “Focus” crossed the $100 million milestone this weekend, generating $928,000 from 735 screens in 20 markets for Warner Bros.

DreamWorks Animation’s “Home” gained 11 percent and took in $11 million in its second week in China, raising its overseas total to $170 million for Fox. “Far From the Madding Crowd” took in $2 million and was second in its UK debut for Fox Searchlight.