The world’s top female athletes, leaders in sports media and industry influencers gathered this week not only to talk about their love of the game but also issues central to the current cultural environment.

With the #MeToo movement having launched shortly after the 2017 Summit and the Kavanaugh hearing still dominating headlines — gender equality, sexual assault, workplace harassment and female empowerment steered the discussion more than ever. 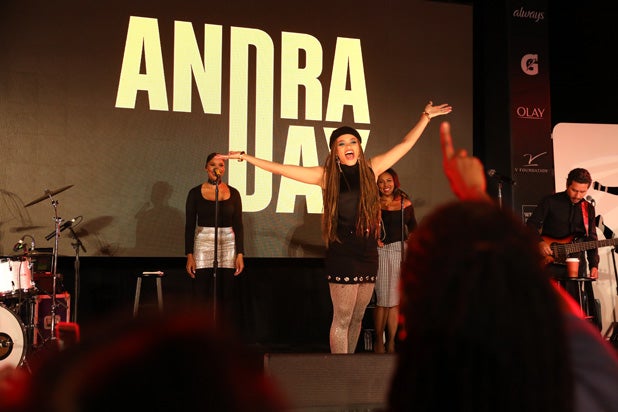 Despite addressing serious issues impacting women, ESPN talent such as Sarah Spain, Julie Foudy, Hannah Storm, Cari Champion and Mina Kimes added some light-hearted fun into the mix when they took to the stage.

From an intimate performance of singer Andra Day’s empowerment anthem “Rise Up” and the brave stories of sexual assault survivors, to LeBron James’ manager/confidante Maverick Carter telling everyone to “be selfish” and ESPN president Jimmy Pitaro dropping “Top Gun 2” casting news, here are some of the top thought-provoking and conversation-sparking quotes: 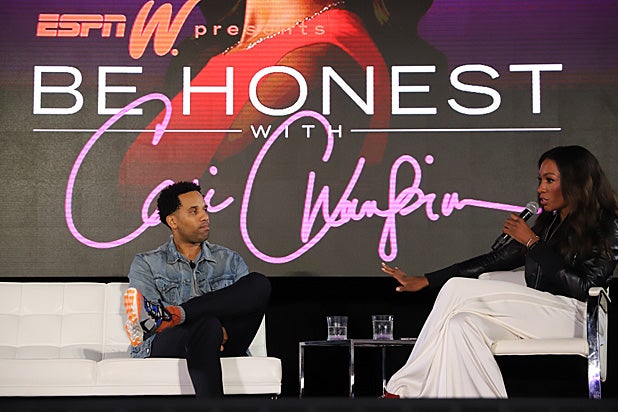 Maverick Carter, CEO of SpringHill Entertainment and “UNINTERRUPTED” with co-creator LeBron James
[On breaking into the entertainment industry]: “It is all about telling the story. We thought that if we stuck with the most authentic version of ourselves and LeBron kept doing his main thing (basketball) then we could build something lasting. If you build something on bulls— then you’re screwed.

“The key to making any deal is to be very clear on what you want — that is the easy part — but also understanding what the other side actually needs. Everyone has to leave the room feeling good and not like they’ve been taken advantage of. The fact of the matter is people are very selfish, but there’s nothing wrong with that and selfish gets a bad rap.”

[On if LeBron will ever run for president]: “Right now, he is focused on being a great basketball player. I don’t see him focusing on it [politics] right now. But who knows what’s in the future. He’ll be 34 in December, so who knows how much longer he’s going to play basketball. You never know what’s next with that guy.” 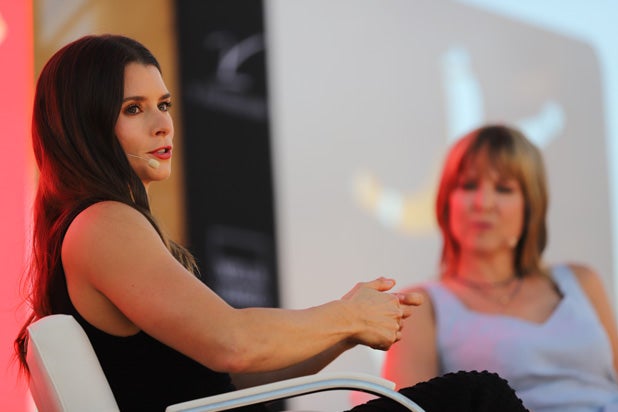 [On retiring from pro racing]: “I came to the realization that what made me happy wasn’t really racing. It was wasn’t like I’d wake up thinking about it every single day. Would I go to a race track for fun? Heck no! Last year, having my winery launch, my clothing line launch and then my book came out — all these things were happening at the same time.”

[One being asked to host the 2018 ESPYs]: “I think I said ‘me?!? You get Justin Timberlake to do that, not me.’ Saying yes was the scariest part. If something is equally as exciting as it is scary then go for it. You will never have growth unless you have pain. One part of the growth was having confidence in myself, so I said yes. We’re not scared of change, what we’re scared of is leaving something behind. You have to shift your mindset and ask, ‘but what if it’s better?'” 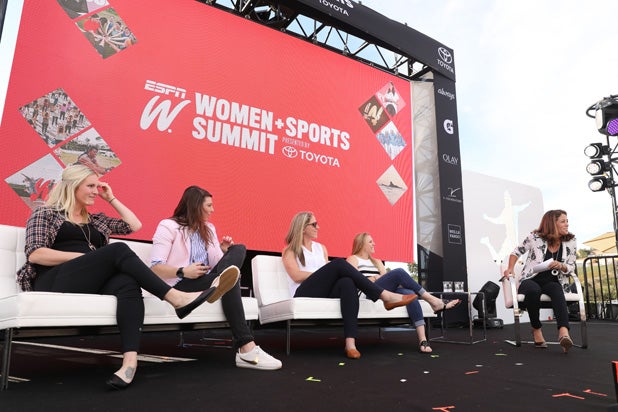 U.S. national ice hockey team gold medalists Meghan Duggan, Hilary Knight, Jocelyne Lamoureux-Davidson and Kendall Coyne Schofield
[On threatening to boycott the 2017 World Championship]: “Our sport needed major change in many areas — most importantly how they [USA Hockey] treated women in our sport. It was the culmination of many years of mistreatment, we did it to help the next generation coming up through the rinks … we had to dig down and come together to stand up for what we’re fighting for.

“Stand up for what is right and what you know. Stick together and create the change.” 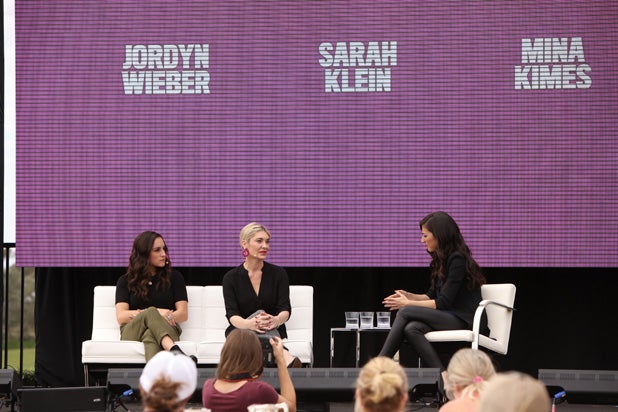 Sarah Klein and Olympic gold medalist Jordyn Wieber, survivors of sexual abuse from Dr. Larry Nassar
[Wieber on being abused from eight years old]: “Most of us don’t know childhood sexual abuse is happening while it is happening. A lot of us would have said then he was a good guy. At first, I didn’t want to think about it, I’d block it out. I remember saying ‘he did that treatment to me but I wasn’t sexually abused.’ I didn’t want to go through the shame that I was sexually abused and let it happen.

“Everybody protected him and that makes me so angry — my motivation is to make sure no one goes through this again. That culture has to change. Coaches need to care about kids more and not about winning. The point of sports is not just to win.”

[Klein on testifying against Nassar]: “He was my loved one, my friend, my trusted advisor. I was 38 when the Indy Star article came out, and it took me time to realize … he had told me it was OK, that was all I ever knew. The article was the ‘aha moment’ of all aha moments. One in four women are sexually abused, most of us don’t get the chance to look at our abusers in the eye. I had to walk my eight-year-old self to that podium in court. It was a redefining moment for my identity. I was able to walk away as a woman.” 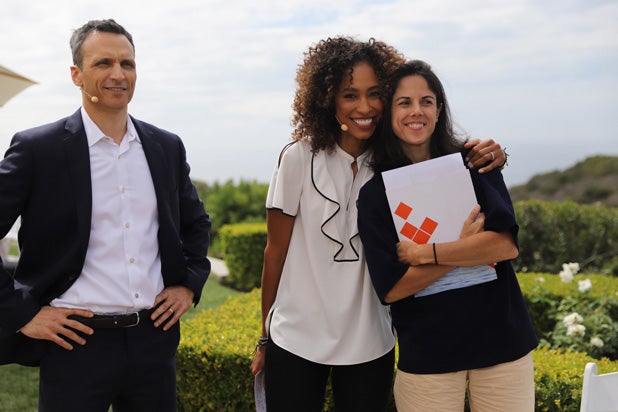 Jimmy Pitaro, ESPN president
[On the future growth of ESPN]: “We have to appeal to a younger audience, and if we don’t all of us will be in trouble. And I am speaking to all of us as an industry. We have to first and foremost protect the core audience but also be creating products and services for the younger generation, and a very important component of that is girls. One of my biggest priorities is the brand, making it more relevant and for the younger generation.”

[On workplace equality]: “We have done a good job in terms of diversity but not always a good job at inclusion. I heard it and we’re doing something about it. Women cannot feel like they’re on the team and not in the game.”

“One of the things that I love about ESPN is its heart. So much that we do is about heart … telling those stories that get you emotional and gives you goosebumps. Sports is the great unifier. You forget about all the nonsense and the divisiveness that is out there right now.”

Andra Day’s “Rise Up” becomes the theme song for ESPN’s annual gathering of the world’s female athletes, leaders in the sports world and industry influencers

The ninth annual espnW: Women + Sports Summit kicked off at the Pelican Hill Resort in Newport Beach, California, on Monday, where the biggest names in sports, business and media tackled difficult topics from sexual abuse, gender equality and creating opportunities for athletes with special needs.