As the debate around gun control in the U.S. has crescendoed, gun violence in Hollywood films with PG-13 ratings is becoming more acceptable, according to a new study.

Parents with children under the age of 17 are more desensitized to gun violence when it’s deemed justified, according to the study from the Annenberg Public Policy Center (APPC) at the University of Pennsylvania.

While gun violence was more acceptable when it was justified, parents did think the movies would be more suitable for teens age 15 and older, rather than the recommended 13 years old and older by the Motion Picture Association of America.

“The findings suggest that parents may want a new rating, PG-15, for movies with intense violence,” said Daniel Romer, research director of the Annenberg Public Policy Center, in a statement. “Violent movies often get a PG-13 rating by omitting the consequences of violence such as blood and suffering, and by making the use of violence seem justified. But parents of teenagers say that even scenes of justified violence are upsetting and more appropriate for teens who are at least 15.”

Researchers in the study showed movie clips to a national sample of 610 parents with at least one child between 6 and 17 years old.

Scenes from the R-rated movies were edited, taking out graphic and upsetting material such as blood and suffering to mimic the effect of PG-13 movies.

Also Read: Jennifer Hudson: Gun Violence 'Can Happen to Anybody'

The study found that parents were less upset by the justified violence and thus more lenient on what age is appropriate for a child to watch it. When they watched the scenes of unjustified gun violence, however, they were more restrictive. 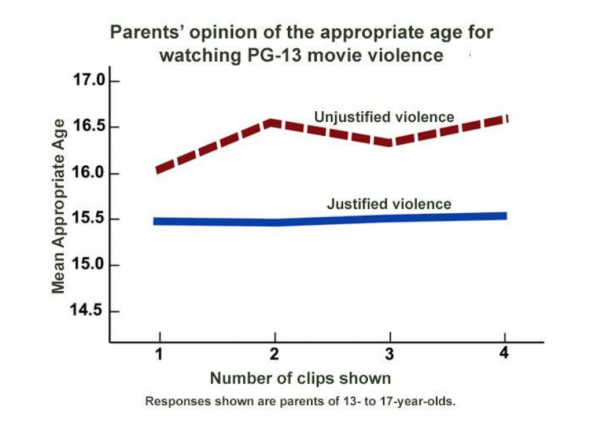 “We still don’t know whether repeatedly seeing movies with justified violence teaches children that using guns is OK if they think it’s justified,” Romer said. “Hollywood is exploiting the movie rating system by leaving out harmful consequences like blood and suffering from PG-13 films.

“By sanitizing the effects of violence, movie makers are able to get a PG-13 rating and a wider audience for their films,” he continued. “But this gun violence may be just as brutal and potentially harmful to young viewers.”

We’re about four and half months into 2018 and there have been 92 reported mass shootings in the U.S., according to the Gun Violence Archive, a not for profit organization that’s been tracking gun-related incidents since 2013. The database finds that 905 teens (ages 12 to 17) have either been injured or killed by a gun in 2018.

One of the most notable incidents this year was the Parkland shooting at Marjory Stoneman Douglas High School in Florida, in which the shooter killed 17 people.

That shooting sparked a rallying cry for a change in gun laws that has been met with staunch opposition.