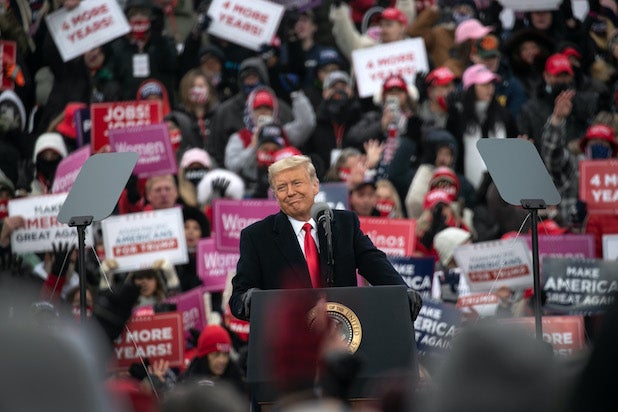 President Donald Trump’s 18 campaign rallies have “ultimately resulted in more than 30,000 incremental confirmed cases of COVID-19…and likely led to more than 700 deaths,” according to a new study by Stanford University researchers.

The study, which was released on Friday, investigated the effects of large gatherings on the spread of COVID-19, and encompassed a 10-day post-event analysis of 18 Trump rallies held between June 20 and Sept. 30. Those figures were compared with the spread of the virus in other areas of the country that didn’t hold rallies.

Among the authors of the paper is B. Douglas Bernheim, the chair of Stanford’s economics department, who concluded that not following CDC guidelines about social distancing and the wearing of masks elevated the risk of contracting the coronavirus.

“Our estimate of the average treatment effect across the eighteen events implies that they increased subsequent confirmed cases of COVID-19 by more than 250 per 100,000 residents,” the study reads. “Extrapolating this figure to the entire sample, we conclude that these eighteen rallies ultimately resulted in more than 30,000 incremental confirmed cases of COVID-19. Applying county-specific post-event death rates, we conclude that the rallies likely led to more than 700 deaths (not necessarily among attendees).”

Trump rallies have several distinguishing features that lend themselves to the study:

•  A large number of attendees.
•  Trump campaign events are easily identified in each county and yields a distinguishable difference between “treated” and “untreated” counties.
•  Events occurred on identifiable days.
•  Rallies were not geographically ubiquitous.
•  The degree of compliance with guidelines concerning the use of masks and social distancing was low, in part because the Trump campaign downplayed the risk of infection.

“This feature heightens the risk that a rally could become a ‘superspreader event,'” the report said in reference to that last point. The Trump campaign has come under fire for holding large, shoulder-to-shoulder packed events where mask-wearing is not enforced, including the Rose Garden ceremony in September announcing Amy Coney Barrett to the Supreme Court, where several attendees tested positive in the days that followed.

Despite a spike in COVID-positive cases to nearly half a million Americans in the last week, the president and his supporters continue to mock criticism of his events. A billboard in Iowa with directions to his recent rally read “Trump Covid – Superspreader Event” with a “this way” arrow. At the time of the event, the state had a 20% positivity rate.

According to data from Johns Hopkins, there are currently 69,967 COVID-positive diagnoses per day in the U.S. “If the current trend continues, the U.S. could see 100,000 new cases per day,” Dr. Ashish Jha, the dean of Brown University School of Public Health, told CNN. Trump, meanwhile, has scheduled 14 rallies in the last three days of his campaign, all in five states he won in 2016 — Michigan, Iowa, North Carolina, Georgia and Florida — but where he now trails Joe Biden.

The Stanford study concluded: “Our analysis strongly supports the warnings and recommendations of public health officials concerning the risk of COVID-19 transmission at large group gatherings, particularly when the degree of compliance with guidelines concerning the use of masks and social distancing is low. The communities in which Trump rallies took place paid a high price in terms of disease and death.”

You can read the entire study by clicking here.