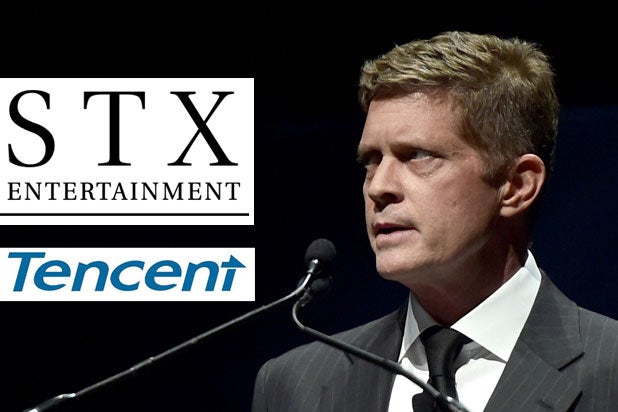 Behind a strategic investment from one of China’s media behemoths, STX is doubling down on China and using the influx of cash to expand beyond its film studio roots into music, digital and virtual reality.

Thursday afternoon, the studio announced that it has secured an equity investment round from a group including China’s Tencent — the owner of its most popular social media network, WeChat — and Hong Kong media company PCCW. STX will use the funds to expand and diversify into music and digital content, as well as mobile apps and virtual reality, in order to give its stars more avenues to make money. Financial terms were not disclosed.

As part of the deal, STX signed content partnerships with Tencent and PCCW and will also create Asian-tailored content for PCCW’s TV, digital and over-the-top streaming services. China could become the world’s biggest box office as soon as 2017, and streaming services are also on the rise — although regulators have cracked down on some foreign media, such as Disney’s DisneyLife streaming product. Having partners like Tencent should help STX get its digital content to Chinese audiences.

“We conceived STX for the new media landscape to meet the changing needs of talent, industry partners and audiences. We’ve broken down the traditional silos of the entertainment business to become the best home for stars and creators to tell their stories anywhere and through any format,” Robert Simonds, Chairman and CEO of STX Entertainment, said in a statement. “Developing deep relationships with smart, experienced, well-connected partners is a cornerstone of our value proposition. We’re excited to be collaborating with PCCW and Tencent, extremely well-respected and powerful companies, as we execute on our long-term strategy.”

East West Bank Chairman Dominic Ng also participated in the latest investment round and will join STX’s board. East West helped arrange the co-financing deal that STX signed with China’s Huayi Bros. Media last April, as well as the co-financing deal that Lionsgate and China’s Hunan TV agreed to a month prior that seemed to open the floodgates for China-Hollywood partnerships.

Original STX investors including private equity firms TPG and China’s Hony Capital, as well as Gigi Pritzker and William Wrigley Jr. re-upped for this latest investment round. In the statement, Hony Capital Chairman John Zhao highlighted STX’s big bet on China as a wager on the future of entertainment.

“By making China a foundation of its strategy and structure from inception and building the right relationships in the region, STX has put itself in an unparalleled position to unlock content opportunities for talent and brands in China, the world’s fastest-growing entertainment consumption market, and throughout other key Asian markets,” Hony Capital Chairman John Zhao said in the statement.

Robert Simonds founded STX in 2014 and secured investments from deep-pocketed private equity firms TPG and China’s Hony Capital, as well as bank debt, that he said positioned the studio to spend upwards of $1 billion a year making movies. While major studios have focused on massive-budget tentpole films, STX’s strategy was to find medium-budget films anchored by stars and use its direct distribution deals with the four largest American cinema chains to get those movies to audiences. Simonds said that last year’s deal with Huayi Bros. would enable STX to up its planned quota of eight to 10 films a year to 12, a number STX reiterated in Thursday’s announcement.

STX has had a mixed run this year at the box office. “Bad Moms” has delivered $52.8 million in domestic box office receipts so far on a $20 million budget, but the studio’s Matthew McConaughey Civil War drama “Free State of Jones” has reeled in only $20.8 million at U.S. theaters despite its estimated $50 million budget. Last month, Sam Brown replaced Cathy Schulman as STX’s head of production.

In the release, STX called its film business “self-sustaining,” and a spokeswoman for the company told TheWrap that the new capital will exclusively be used to develop the new lines of business and bolster its international expansion, and would not fund the film slate.

STX launched a London-based international division and an unscripted TV wing in April. The company announced that its scripted and unscripted TV divisions have combined to secure deals for 22 shows with networks in the U.S. and Asia. STX will also become the first American entertainment company to be involved in a show that is broadcast in China.