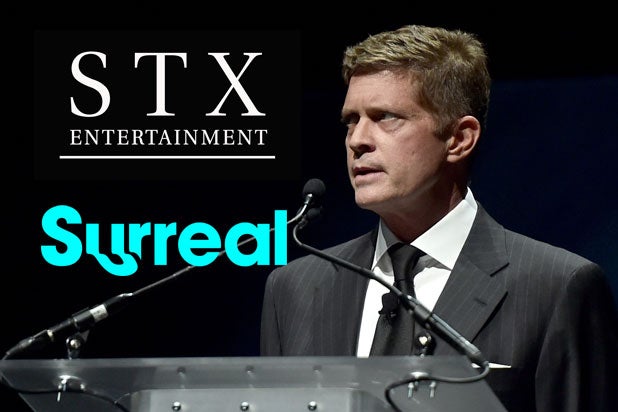 Flush with cash from one of the world’s biggest media and internet companies, Robert Simonds’ STX Entertainment is going from the big screen to virtual reality with its acquisition of Surreal Inc., a VR company that will become a division of the studio.

Earlier this month, STX received a round of investment led by Chinese technology, gaming and entertainment behemoth Tencent in a move that the studio said would position it to expand well beyond movies, which it appears to have done with Tuesday’s announcement. Terms of the deal were not disclosed.

“Virtual reality is exploding, and STX sees a unique opportunity to create one-of-a-kind content by pairing the world’s biggest stars and storytellers with best-in-class VR capabilities,” STX President Sophie Watts said in a release announcing the deal. “Our seamless integration allows for a platform-agnostic exchange of ideas and talent across film, television and emerging media, such that STX will become the number one destination for talent, brands and content creators seeking a way to create programming designed to play on every VR system.”

Simonds founded STX in 2014 with the goal of spending upwards of $1 billion on making 12 movies a year anchored by A-list stars. He secured initial investments from deep-pocketed partners like private equity firms TPG and China’s Hony Capital — and last year, a co-financing pact with China’s Huayi Bros. Media — to help fund his slate.

A big part of STX’ strategy is to use those movie stars as linchpins for a cross-platform strategy; for example, placing them in TV shows in Asia or digital series in Europe — whatever format makes the most sense.

To that end, STX expanded with a London-based international division and an unscripted TV wing earlier this year, and on Aug. 11, announced the equity investment led by Tencent — owner of WeChat, China’s all-encompassing social media service — and Hong Kong’s PCCW that valued the studio at $1.5 billion, according to a source close to the deal.

That infusion of capital was dedicated to STX’ non-film expansion, particularly into international, digital and virtual reality, and not to fund STX’s film business, which it called “self-sustaining” in the release announcing the Tencent and PCCW investment.

STX has had a mixed run at the box office this year, with “Bad Moms” a $20 million success story and “Free State of Jones” a $50 million flop. The Surreal purchase is the first acquisition made with that latest round of funding, and a source close to the company suggested more deals are coming. In the release, Surreal co-founder Andy Vick pointed to STX’ platform-agnostic, star-centric strategy as a big draw in agreeing to join the studio.

“As part of STX, we will have the resources to move the needle in a way we haven’t yet seen in the immersive content space,” Vick said in the statement. “We are creating and thoughtfully programming a slate of compelling original content with A-list stars in front of and behind the camera. Audiences are searching for a reason to put on a headset, and that’s exactly what we’re going to give them.”