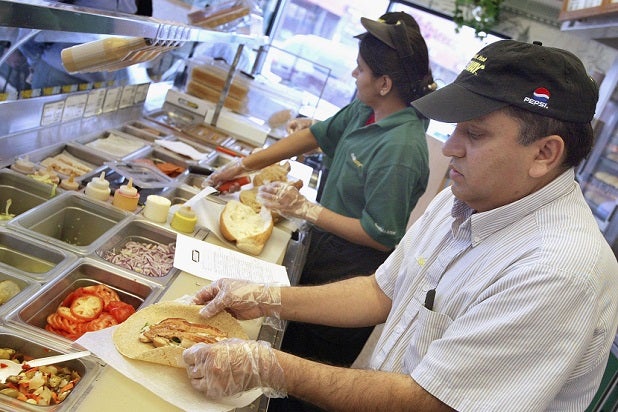 Subway is not chickening out in its showdown with the Canadian Broadcasting Corporation.

The fast-food chain has filed a whopping lawsuit against the CBC over a claim that the chicken it serves is largely made up of soybean filler.

And Subway is asking for a jumbo-size sum in damages — $210 million, to be exact. Which buys a lot of $5 footlongs, especially with an employee discount.

A spokesman for Subway told TheWrap in a statement on Thursday that the company had filed the complaint over “defamatory and absolutely” false allegations made on the CBC program “Marketplace.”

“We have issued a Notice of Action in Canada against the Canadian Broadcasting Corporation that asks for $210 million in damages over allegations made by its program, ‘Marketplace,’ that are defamatory and absolutely false,” the Subway spokesman said. “Despite our efforts to share the facts with the CBC about the high quality of our chicken and to express our strong objections to their inaccurate claims, they have not issued a retraction, as we requested.”

“Serving high-quality food to our customers is our top priority, and we are committed to seeing that this factually incorrect report is corrected,” the statement concluded.

According to the New York Post, “Marketplace” aired a segment called “The Chicken Challenge” on Feb. 24 which claimed that Subway’s oven-roasted chicken was only made up of 53.6 percent chicken, while its chicken strips only bore approximately 42.8 percent poultry.

The segment cited DNA tests conducted by Trent University in Ontario, which contended that chicken served by Wendy’s and Tim Horton’s contain much higher percentages of poultry.

But according to Subway, two independent labs tested Subway chicken and found that the “alleged test results” presented on “Marketplace” were “false and misleading.”

“Test results from laboratories in Canada and the U.S. clearly show that the Canadian chicken products tested had only trace amounts of soy, contradicting the accusations made during the broadcast of ‘CBC Marketplace,'” the company said in a statement provide to TheWrap.

The company added that it shared its results with “Marketplace,” as well as “the lab that conducted the flawed test.”

“Our chicken is 100 percent white meat with seasonings, marinated, cooked and delivered to our restaurants,” Subway chief of food safety & quality Dave Theno said. “The chicken has no artificial colors, flavors or preservatives. Through years of testing, we’ve never seen results like the program claimed.”

CBC spokeswoman Emma Bédard defended the network’s coverage in a statement to TheWrap, saying, “We believe our journalism to be sound and there is no evidence that we’ve seen that would lead us to change our position.”

1998: Jared, a student at Indiana University, weighed 425 pounds. He started his "Subway diet," which consisted of two Subway sandwiches a day minus cheese and mayo, and instituted a daily walking regimen.