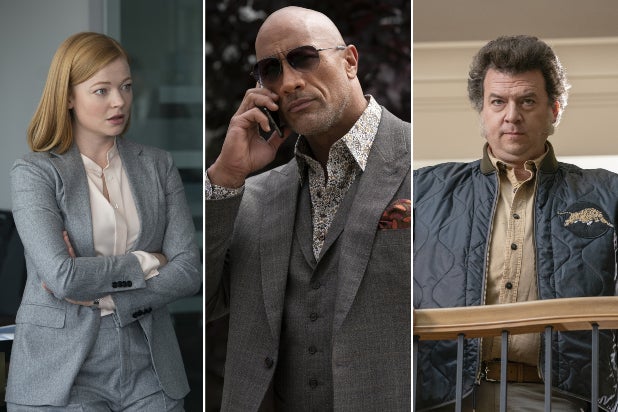 This coming Sunday’s episodes for the trio can be streamed beginning Friday, Aug. 30, via HBO Go, HBO Now and its on-demand platforms. The episodes will debut at their originally scheduled times on Sunday, Sept. 1.

“Gemstones” is the latest comedy from Danny McBride, following “Eastbound and Down” and “Vice Principals.” The series premiere on Aug. 19 was the pay-TV channel’s most-watched linear debut of a comedy series in more than three years. The hour-long premiere brought in 844,000 viewers across HBO’s platforms, including streaming.

“Succession” meanwhile is in its second season and has already been renewed for a third. “Ballers,” which stars Dwayne “The Rock” Johnson, is set to wrap after its current fifth season.

Here are the episodes that will be made available early, as described by the network:

“Succession”: Roman (Kieran Culkin) begins a six-week management training program in the Parks division and is irritated about spending so much time with “normals.” Logan (Brian Cox) brings Shiv (Sarah Snook) in for a day at Waystar, raising suspicions with Kendall (Jeremy Strong) and Gerri (J. Smith-Cameron). Connor (Alan Ruck) and Willa (Justine Lupe) attend the funeral of a family friend with a complicated past. Logan and Kendall arrange a covert meeting with PGM CEO Rhea Jarrell (Holly Hunter), as a controversy surrounding a star anchor leads to a day of chaos at ATN headquarters.

“The Righteous Gemstones”: Aimee-Leigh’s (Jennifer Nettles) elderly brother Baby Billy (Walton Goggins) returns to the Gemstone ministry, bringing along his much younger wife Tiffany (Valyn Hall). Jesse closes ranks on his co-conspirators to root out the identity of his blackmailers.