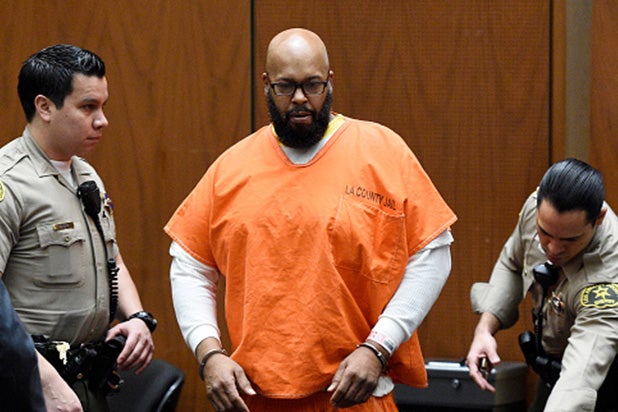 In an explosive court filing, the attorney for disgraced former rap mogul Marion “Suge” Knight claims that Dr. Dre and a deputy for the Los Angeles County Sheriff’s Department conspired to kill Knight — and that a “Spotlight”-style coverup has been employed to keep the facts from getting out.

In a motion filed in Los Angeles Superior Court on Friday, Knight attorney Thaddeus Culpepper claims that a sheriff’s deputy enabled the gunmen who opened fire on Knight at 1Oak nightclub in West Hollywood in 2014, and that a suspect in the shooting admitted that “Dr. Dre paid him and a friend $50,000 to kill Knight” — but was inexplicably released from custody.

According to the filing, the Sheriff’s deputy, Henry Boyd, was captured on video letting the gunmen in the front door of the club and later helped them flee the country at LAX.

Knight, who currently faces murder charges for the death of Terry , who Knight allegedly ran over in January 2015 during an altercation at Tam’s Burgers, also claims that Cle “Bone” Sloan — who was injured during the incident — was told by Dr. Dre to “take care of Suge,” while working as a technical advisor on the N.W.A biopic “Straight Outta Compton.”

An attorney for Dr. Dre called the allegations “ridiculous.”

Since his incarceration on the murder charge last year, Culpepper claims, Knight’s rights to phone calls, mail and visits have been restricted by the Sheriff’s Department via orders that the Department improperly applied for under seal.

In his filing, Culpepper likens his client’s situation to the movie “Spotlight,” about the Catholic church’s cover-up of a child-molestation scandal involving its priests.

Culpepper suggests that Knight’s rights have allegedly been violated “in order to prevent Knight from having a fair trial and to ensure the continued coverup of facts and information that link 1Oak, Tam’s and the murder of Tupac Shakur and the attempted murder of Suge Knight in Las Vegas in 1996.”