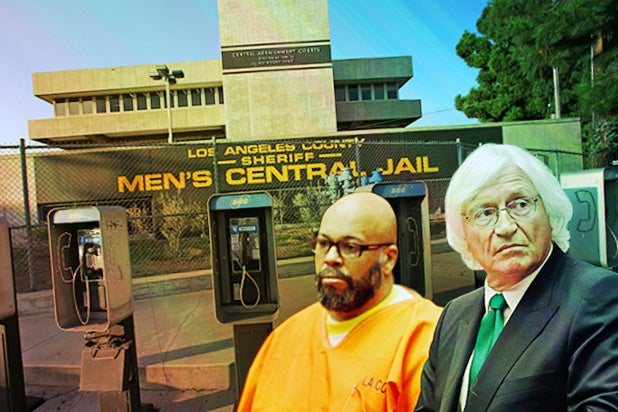 Instead of ringing in the New Year with his family, Suge Knight welcomed 2016 at the Men’s Central Jail in Los Angeles, which in his lawyer’s opinion, is an injustice.

“He shouldn’t be there,” Thomas Mesereau told TheWrap. “He’s in county jail, it’s the worst jail in the country.”

The Los Angeles County Sheriff’s Department, which runs the facility, did not immediately respond to TheWrap’s request for comment, but Mesereau had plenty to say.

“He should be at home and he should have been granted reasonable bail, like everybody else,” the criminal defense lawyer complained. “This case is going forward because of who he is, not because of anything he did that was wrong.”

Knight has been locked up since Jan. 30, 2015, when he surrendered to face charges in connection with a fatal hit-and-run. Prosecutors say on Jan. 29, he plowed his truck into two men after an argument on the set of a promo shoot for “Straight Outta Compton,” then fled the scene.

Knight, 50, says he was defending himself and has pleaded not guilty to murder and attempted murder charges.

In late March, as his bail was set at $25 million, the Death Row Records co-founder collapsed in court. Knight’s then-lawyer, Matthew Fletcher, went on a tirade about the L.A. County jail system, claiming Knight was being treated worse than the U.S. detainees at Guantanamo Bay. In his words, the conditions under which Knight was being detained “truly should shock people.”

Mesereau, who represented Michael Jackson during the singer’s 2005 child molestation trial, was brought in to defend Knight after the fallen music mogul parted ways with three other attorneys handling his case, including Fletcher, James Blatt and David Kenner.

Knight’s bail has been reduced to $10.5 million, which he still hasn’t been able to make.

“The bail was set too high, in my opinion,” Mesereau said about the lower bail amount. “He’s a person of character and courage and fortitude, and he looks forward to his day in court.”

The L.A. County District Attorney’s Office told TheWrap it had “no comment” about Mesereau’s complaints.

Knight’s trial date will be set at a hearing on Feb. 26.