While Warner Bros. tentpole “Suicide Squad” came in at No. 1 this weekend with an estimated $43.8 million, it’s not really a figure to brag about.

That’s rivaled by the studio’s other superhero movie that sputtered: “Batman v Superman: Dawn of Justice,” which suffered a devastating 69.1 percent drop its second weekend at the box office, only raking in $51.8 million after debuting with a whopping $166 million.

The Ben Affleck-Henry Cavill film had a bigger drop-off than “X-Men Origins: Wolverine” and “Elektra,” which had declines of 69 percent — still worse than “Suicide Squad,” starring Will Smith and Margot Robbie.

Seeing as the David Ayer-directed film had a $175-million price tag — and that’s not even counting the marketing budget, which was likely in the tens of millions — the film’s drop-off isn’t quite as detrimental as it was for “BvS,” made on a massive production budget of $250 million.

But that’s not saying much.

According to Box Office Mojo, the two comic-book-based films that had biggest second weekend drop-offs were 2010’s “Jonah Hex” and 2003’s “Hulk” (both 69.7 percent), although they didn’t open nearly as huge as both of this year’s Warner Bros. DC Comics movies.

“Jonah Hex” debuted to $5.4 million, whereas “Hulk” opened to $62.1 million — chump change in comparison to the both superhero movies out of Warners.

Fox’s “Fantastic Four” also earned the dubious distinction of second-weekend weakness in 2015. It earned only $25.7 million its opening weekend but also suffered a devastating blow when it grossed 68.2 percent less its second weekend. “Watchmen” also followed with a 67.7 percent decline in 2009. 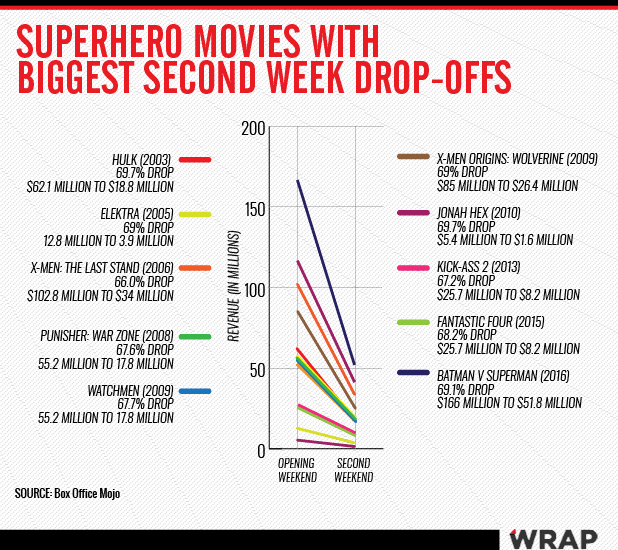