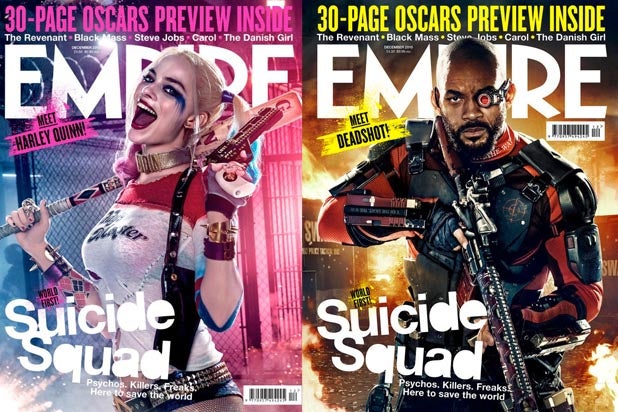 The Joker’s not the only “Suicide Squad” character getting star treatment from Empire Magazine.

The Clown Prince of Crime’s main squeeze, Harley Quinn (Margot Robbie), and fellow supervillain Deadshot (Will Smith) also got their own covers, along with the creepy Enchantress (Cara Delevingne).

But another good look at the characters from Warner Bros.’ highly anticipated release isn’t all fans got. The preview of the December issue’s cover story revealed that Quinn will get tangled up in a love triangle with Deadshot and Joker.

“Harley is the biggest troublemaker, but Deadshot’s actually eyeballing her a little bit,” Smith said. “There’s a pretty ragged romantic triangle there.”

Director David Ayer has reportedly said Quinn’s arc is “about her breaking free of The Joker and becoming this fully actualized, independent person. That really is a metaphor for everyone’s journey here.”

While talking about his own character, Smith revealed Deadshot ends up joining the misfit group of antiheroes when a “really big career score” goes “terribly, terribly wrong.”

Perhaps Smith could relate to his character after starring in “After Earth,” a potential big career score that went terribly, terribly wrong with critics and at the box office.