The “2016 summer slump” is now officially a misnomer as North American ticket sales for the season finished among the strongest ever.

The final tally is in and this summer ended after 123 days with $4.483 billion in box office grosses, according to comScore. That’s just .04 percent less than last year — which had the luxury of seven extra days to come in at $4.484 billion to be the No. 2 highest grossing summer of all time. (The summer is measured by the first Friday in May through Labor Day.)

Yes, it was a squeaker this year.

“This has to go down as one of the most interesting and confounding seasons on record,” comScore senior analyst Paul Dergarabedian told TheWrap, explaining that summer 2016 came down to “a true photo finish” as it was “technically dead even with last year.”

The extra week in the summer of 2015 was truly the only thing holding this year’s season from ranking at No. 2.

According to comScore, this year’s movies paced ahead of 2015’s collective summer hits, which included “Jurassic World” and “Inside Out,” as last year racked up $4.02 billion in the 108 days after the first Friday in May. 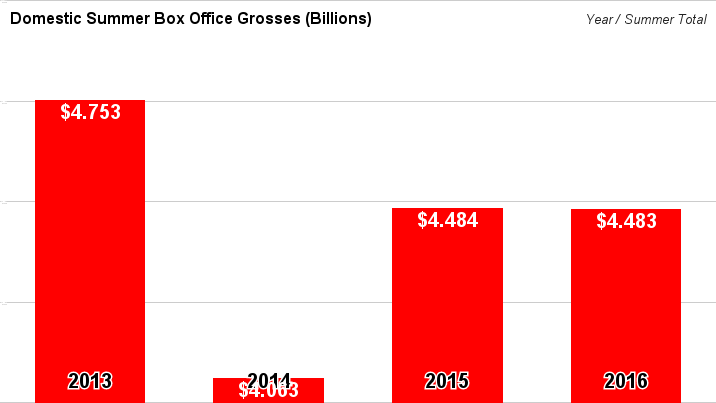 “This summer suffered from the problem of perception versus reality,” Dergarabedian said.

As of Aug. 22, 11 of 16 weeks outperformed comparable weeks in 2015, according to both comScore and the National Association of Theatre Owners.

All of it set up this summer, with blockbusters like Disney’s “Finding Dory” and “Captain America: Civil War,” poised to end in the top three biggest box office summer on record. (2013 holds the all-time record, with $4.75 billion in overall domestic grosses.)

However, it’s not all great news as TheWrap has learned that estimated attendance was down 3.5 percent.

So why did a lot of people think the summer was on a downturn? Blame it on the lackluster performances of some high-profile titles, National Association of Theatre Owners vice president of communications Patrick Corcoran said. “The press likes to declare winners and losers, but the health of the industry is not dependent on a few titles,” he told TheWrap.

There were a few utter bombs, including the pricey Paramount-MGM reboot of “Ben-Hur,” Legendary’s “Warcraft” (which more than recouped its losses abroad), and also Disney’s “Alice Through the Looking Glass.”

There were also big-name titles, like Fox’s “X-Men: Apocalypse,” which made a lot of money ($155.4 million domestically) but also came with a hefty price tag ($178 million in production costs, and that’s not counting the presumed tens of millions the studio spent on marketing).

Sony’s “Ghostbusters” and Paramount’s “Star Trek Beyond” are two more big-budgeted movies that may or may not eke out a profit but nonetheless contributed significantly to the overall box office tally.

The result has been a kind of lifting of all boats: This summer has seen 13 movies surpass $100 million in domestic grosses, one more than last summer.

Also Read: Here's Why 'The Conjuring 2' Might Be a Bigger Hit Than 'Captain America: Civil War'

Still, there is no denying the glut of sequels (14 this summer, four more than in 2015) has worn on some audiences’ nerves. And that list doesn’t even count reboots like “Ghostbusters.”

“This bottom line is good for the industry,” Dergarabedian said, noting that even underperforming sequels still managed to lure ticket buyers. “But budget losses aren’t good for the studios.”

One other bright spot this year: “Suicide Squad,” which has now made more than $300 million in North America and is now the No. 4 movie of the summer, defied the odds by opening in August — traditionally considered a dead zone for studio releases.