Depending on how you look at it, 3D has either been a huge part of the summer box office … or not.

There were five digital 3D movies on the docket this summer, three of which have already opened: Disney/Pixar’s "Up," Fox’s "Ice Age: Dawn of the Dinosaurs" and Disney’s "G-Force."

And while only the opening 13 minutes of "Harry Potter and the Half-Blood Prince" were in 3D, the blockbuster increased the visibility of the format this summer through its relationship with IMAX.

The impact of 3D on each specific film’s final gross is inarguable. 3D screens accounted for an estimated 51 percent of the domestic gross of “Up,” 47 percent of “Ice Age” and 54 percent of Disney and Jerry Bruckheimer’s “G-Force.”

Two of the three films will land in the top 10 once the summer is tallied: "Up” is the second highest grossing movie of the year with close to $287.4 million. “Ice Age 3” maintains the number seven spot with $187.9 million.

(Incidentally, just ahead of “Ice Age 3” is another 3D title, Dreamworks Animation’s March release, “Monsters Vs. Aliens,” with $198 million.) 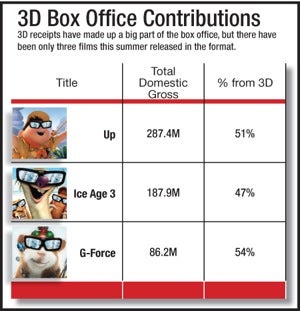 But a look at the overall box office shows that the format is still merely a blip on the overall distribution screen. Through Tuesday, summer box office currently stands at $3.6 billion, down almost 1 percent from last year at this time.

The numbers demonstrate that moviegoers remain interested in — and even are willing to pay a premium for — 3D. But they also underscore the challenges of the still-limited amount of product and number of digital 3D screens available.

“The number of 3D films have increased at a much greater rate than the number of 3D screens, that’s the issue today,” said Dan Fellman, president of Warner Bros. domestic distribution. “(Exhibitors) are trying. It is a very tough marketplace. They will get it done, and when they do you will see the number of 3D movies expand as well.”

So as deployment of digital 3D projection capabilities is steadily rising, these releases should have slightly more 3D venues available than their predecessors.

When the summer’s first digital 3D release opened on May 29, it played at 3,766 theaters, including 1,534 3D venues. 3D represents an estimated 54 percent of the total gross.

“Up” soared with the majority of the available 3D screens until “Ice Age 3” opened on July 1. Figures suggest that “Up” held an estimated 500 3D locations over that weekend, but it lost more than 1,000.

“The box office would have be higher, except when ‘Ice Age’ opened, ‘Up’ lost its 3D screens,” said Chuck Viane, Disney’s president of domestic distribution, adding that this scenario has continued with each 3D release since then.

Still, its North American gross makes “Up” the second highest gross for a Pixar movie. “Finding Nemo” still holds the record with a domestic total of $339.7 million.

The third film in the “Ice Age” franchise debuted July 1 in North America in 4,099 theaters, including 1,606 that were 3D ready.

3D represented 40 percent of the screens, and those screens have brought in 48 percent of its domestic gross to date. On its opening weekend, the per-location average for the 3D showings was 2.2 times that of the 2D location average.

The previous films in the franchise had March openings: “Ice Age” grossed $176.4 million and sequel “Ice Age: The Meltdown” took in $195.3 million. Aronson expects the new 3D title to end up with a gross very similar the second film.

“We have to be incredibly happy with that,” he said. “In the summer, you competition is up quite significantly … But we wanted (to wait) to capitalize on the growing number of 3D locations.”

As of last week, the 3D was accounting for roughly 56 percent of the total box office. At press time, “G-Force” had grossed nearly $86.2 million.

Looking broadly at 3D’s impact, Viane said: “Studio exit research suggest that when audiences come out of a 3D movie, the scores are higher.”

Warner Bros.’ “Harry Potter and the Half Blood Prince”

The first 13 minutes of the IMAX-only release of “Half Blood Prince” was shown in 3D in 162 IMAX theaters. Because "Transformers" had already booked IMAX theaters, this version had to wait two weeks after the film’s 2D domestic opening day — and as of Aug. 6, it had generated nearly $6 million. As only the opening sequence was in 3D, Fellman believes that it was the IMAX, not the 3D, that drove this incremental revenue.

Warner Bros. and IMAX announced that “Under the Sea 3D” will be re-released in select IMAX theaters on Aug. 19.