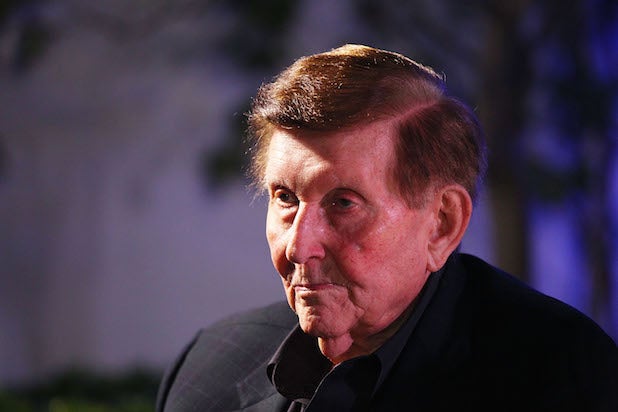 Sumner Redstone’s granddaughter, Keryn Redstone, wrote in a 2016 email that the media titan had become a mumbling “ghost” — a man “incapable of understanding anything that is happening, or that has been happening around him.”

Through Sumner Redstone’s company, National Amusements, the billionaire’s family controls Viacom, which owns networks including MTV and Nickelodeon. But how much he still controls his family and business affairs is a mystery, and is disputed in multiple lawsuits.

Keryn Redstone’s email to attorneys two years ago indicate that Sumner Redstone’s “mind and his health” were in “far worse condition” than she had previously witnessed only months earlier.

“I want to tell the Judge that my grandfather is a ghost,” Keryn Redstone wrote on Sept. 12, 2016. “Today’s meeting with my Grandfather showed me a man – who is incapable of understanding anything that is happening, or that has been happening around him.”

“In between his fading awake state, he cried and mumbled and could not focus or concentrate,” she added.

The email matches a similar description Keryn Redstone made during a court declaration that same year, in which she said that the man she called “Grumpy” had deteriorated to the point that she felt she was “in the presence of a ghost.”

A lawyer for Keryn Redstone told TheWrap he would call back did not get respond to several follow-up requests for comment. A rep for National Amusements declined comment. A person close to the Redstones dismissed the accusations as “untrue” and “unsupported.”

The email raises renewed questions about Sumner Redstone’s mental acuity. His absence from the public eye has led to speculation about whether Shari Redstone is acting on his behalf, or her own.

The Wall Street Journal reported in April that the elder Redstone has been communicating through an iPad with a voice-activated function that includes “yes,” “no,” and “f— you.” But little else is known beyond that.

Shari Redstone has spent much of this year trying to re-merge CBS and Viacom over the objections of CBS CEO Les Moonves, who has stepped down over accusations of sexual harassment.

Sumner Redstone separated CBS and Viacom in 2006, and it is unclear whether he supports Shari Redstone’s efforts to reunite them.

In her email, Keryn Redstone said Shari Redstone, her aunt, had kept her from seeing Sumner Redstone.

The Redstone family is feuding over control of an estimated $40 billion media empire. On Oct. 26, California Superior Court Judge Patricia Nieto is expected to rule on a motion in a case filed by Sumner’s former girlfriend and longtime confidant Manuela Herzer.

At issue in the suit is whether Sumner Redstone had the mental capacity to hire his lawyer, Rob Klieger, to file the lawsuit against Herzer, which demands the return of $70 million that the suit says Sumner gave to Herzer.

Herzer’s lawyers have argued in legal documents that there is “an ever-growing mountain of evidence… that Sumner’s estranged daughter Shari Redstone exploited — and continues to exploit — her father’s mental incapacity” by ordering family lawyers to “file this action on her father’s behalf without his knowledge or consent.”

Herzer depicts Shari Redstone as a conniving daughter hellbent on taking over her father’s media empire, with little regard to his directives.

“With no one to answer to, Shari also began removing Sumner’s long-time friends and business associates from positions of corporate power at Viacom and CBS and installing her own allies as their replacements,” Herzer’s lawyers argued in an Oct. 3 filing.

Keryn Redstone, who in August 2016 petitioned the court to allow her to join the lawsuit in support of Herzer, said in her email that hired medical staff tried to turn her grandfather against her: “The nurse openly and directly participated in trying to poison my grandfather against me during my visit,” she wrote.

In a recent motion seeking a medical examination of Sumner Redstone, Herzer’s lawyers pointed to an iPhone video a form January 2018 made by Sumner Redstone’s longtime friend, Hollywood movie producer Arnold Kopelson, who died Monday at the age of 83.

According to Herzer’s lawyers, the video, which is under seal, shows “Redstone’s capacity has significantly diminished to the point where he has no ability whatsoever to work with counsel.”

Herzer’s lawyers also said that a geriatric psychiatrist, Dr. David Trader, who reviewed the video, had “serious concerns” about Sumner Redstone’s “cognitive capacity,” and found it “extremely unlikely” that Sumner Redstone could have authorized the lawsuit against Herzer.

“He has no free will and he is suffering emotionally, mentally, and physically,” Keryn Redstone wrote to her lawyers in the 2016 email. “He needs the the court to protect him and protect his interest.”