Billionaire mogul Sumner Redstone’s daughter Shari pulled off a legal victory on Monday that may bolster her influence in the boardrooms of Viacom.

The move shows a renewed sense of unity between parent and child, industry analysts said, following years of public estrangement. Renewed harmony could increase Shari’s influence over a seven-person trust that will control the fate of both Viacom and CBS Corp. following the eventual death of the ailing 92-year-old mogul.

“There’s a sentimental aspect there — something generally positive about a daughter taking care of her ailing father,” Rajiv Menon, a culture and media analyst at New York-based firm TruthCo, told TheWrap.

“It’s a strong reminder that dynastic, family-oriented politics still play out, and can mean something,” he added.

For Shari Redstone, the legal win over Herzer also gives the mogul’s daughter more leverage over Dauman — a trusted friend and advisor to her father for years whose temporary status as the senior Redstone’s healthcare proxy raised eyebrows on Wall Street.

In February, Shari Redstone made waves following her father’s resignation as chairman of Viacom and CBS by publicly opposing Dauman’s promotion to that title at Viacom given how enmeshed he was in the Redstone family trust and legal affairs.

“Whoever may succeed my father as chair at each company should be someone who is not a trustee of my father’s trust or otherwise intertwined in Redstone family matters, but rather a leader with an independent voice,” she said in a statement at the time.

Dauman is also expected to be part of the same seven-member board that will control Sumner’s shares in the family-owned company National Amusements, which has the controlling interest in both Viacom and CBS. 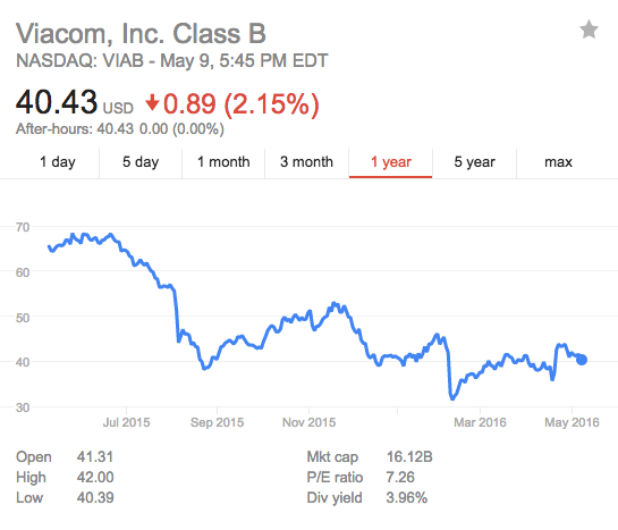 Despite his inside track with the senior Redstone, Dauman has undergone intense scrutiny in the last year for the declines in ratings at Viacom channels and the slow response to changing viewing habits among consumers. The company’s stock price has fallen 38 percent in the last year, closing Monday at $40.43

“People were looking for a change,” one analyst told TheWrap at the February announcement of Dauman’s promotion, adding the title change was a “nonevent.”

Shari was offered non-executive chair positions at both Viacom and CBS, but walked her talk and refused to accept the roles given her obvious ties to the Redstone trust.

There is a focus on how many seats, how many of the trustees and their votes, are controlled by Shari. The reality: Philippe Dauman controls only one seat, of which his hold has become a legally tenuous one…

The trust holding National Amusements’ voting stake in both Viacom and CBS… is often cited as though all decisions will be made by a majority vote of these seven trustees. That is a rather curious falsehood advanced or allowed by several parties involved.

Shari already holds 20 percent ownership and, upon the death or incapacitation of Sumner, his 80 percent interest in Viacom and CBS is lorded over by a trust for the benefit of his five grandchildren.

“The idea that anyone but Shari will determine what happens, who controls Sumner’s trust governing these companies, is simply nonsensical and inconsistent with reality,” Snyder concluded.

Sumner will turn 93 on May 27, with his daughter presumably holding control over his last chapter. Time will tell how she shapes the next for Viacom.