I just landed for the first time at Herb Allen's annual mogul retreat at the Sun Valley Resort. It’s a sparkling sunny day in the Idaho mountains, and the property is filled with soaring trees, shimmering lakes and lots and lots of media moguls. 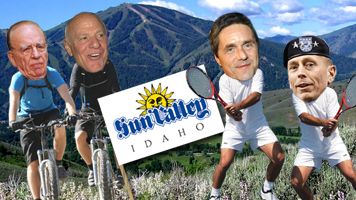 Some are on bikes, most are sitting under green parasols and chatting. (A deal in the marking? We don’t know yet.)

Eric Schmidt, CEO of Google, is wandering around with a wide-angle camera shooting pictures of the flora and fauna. Peter Chernin lounges in the shade while Harvey Weinstein appears to be stalking Disney's Bob Iger for yet another word on his receding Miramax opportunity.

And here, looking all romantic, comes Paramount chief Brad Grey, hand in hand with his girlfriend, Cassandra Huysentruyt. Did I say girlfriend? That girl is wearing a great big sparkly rock on her finger and the couple confirms that, yes, they just got engaged in France.

We push for details. Grey demurs. WaxWord persists and gets this much out of him: He proposed at the Hotel du Cap in Cap d'Antibes.

Cassandra has a conundrum. Will she change her name? Or stick with the Danish-origin Huysentruyt? (I can't say it.) She says she's not sure yet.

Meanwhlie, there was not a whole lot of news coming out of the new-media panel moderated by the New Yorker's Ken Auletta,  starring Jeffrey Katzenberg, Peter Chernin, Barry Diller and Bobby Kotick of Activision. (For the conference's full schedule, click here.)

At "Entertainment in the Digital Age," the panelists discussed their various new-media initiatives. According to several who attended the presentation (which is closed to the news media), Diller touted his 5-minute movies for the Internet, while Katzenberg touched on 3D, naturally, and said monetization of the medium is coming.

It's not clear how Diller plans to monetize his films, but he'll definitely have a great time making them.

Why does everyone who's anyone come to Herb Allen's conference, 15 years in?

"You come here to bond, to stake out your turf, to show everyone you're invited," one mogul told me in an outbreak of candor.

I'm told there are fewer people here than in years past, but the list is still awesomely impressive. News Corp. has a full contingent, from Rupert and Lachlan on down. (We have the full list of media types here, a Wrap exclusive. See if you're on it!) The Comcast emperors, Brian Roberts and Steve Burke, with NBC's Jeff Zucker, showed up on Wednesday.

Chase Carey was seen at the reception desk – in a suit and tie. (Time to change into bike shorts, Chase.)

As for the reaction to the new-media panel, the moguls I talked to were somewhat nonplussed. They feel they've been hearing the same message for nearly the past decade: New media is where it's at, new media is the future, they need to pay closer attention. Meanwhile, most of them continue to see more or less robust revenues coming out of their movie businesses, while still not finding the secret window into a pile of new-media cash.

Sun Valley has changed from the go-go '90s, when media mergers were the rage. It was also the birth of the Internet age, and the conference was filled with Mark Zuckerbergs when they were mere babes — that is to say, teenagers — and pitching their internet companies to these very same moguls, for pennies.

Now, the purpose of the conclave may just be to reaffirm your place in the Hollywood constellation. The sense you get here in Sun Valley is that while the mountains are lush, the sunshine bright, the future still feels uncertain for everyone. So you show up — just in case.