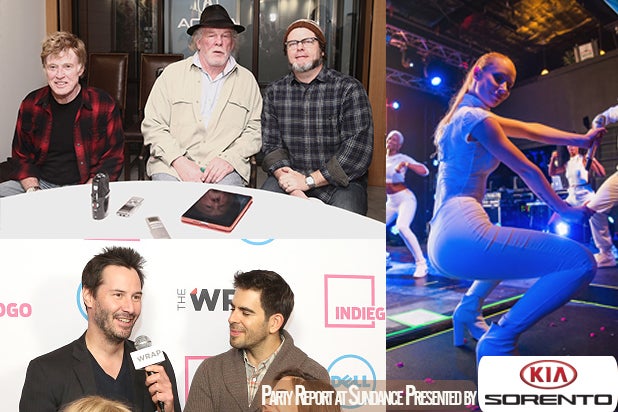 %u201CIs Ben Silverman somewhere in here?%u201D Donovan Leitch shouted in to the microphone in the sweaty basement of Cisero%u2019s just before midnight on Saturday night.

Leitch was on stage fronting a supergroup that included Mark McGrath, Dave Kushner, Jane%u2019s Addiction%u2019s Chris Chaney, and Matisyahu. If Ben Silverman was in the room, he was as quiet as his emails, even if a pocket of jacketed bros cheered the shout-out.

Iggy Azalea blasted across the street from Donovan Leitch’s new echo of “Camp Freddy” in a dueling performances on Saturday night. (Getty images)

%u201CAnyone ever get more than a one word email from (Silverman)?%u201D Leitch continued.

The words and lyrics flowed from multiple voices at this party for %u201CRacing Extinction,%u201D a documentary featuring Elon Musk and produced by Paul Allen that chronicles the effort to reverse the projection that earth will lose half of its species by 2100.

Mark McGrath (in sunglasses) rose his own hit singles from the dead, jumping up on stage with the guys to lead them on a 90%u2019s hopscotch, going from his hit %u201CFly%u201D right in to Rage Against The Machine%u2019s bombastic %u201CKilling in the Name.%u201D

Across the street at Park City Live, Iggy Azalea was wrapping up her one hour set, the diamond in Billboard%u2019s Winter Fest jewel box that brought in Skrillex the night before.

Kevin Bacon‘s tag increases the value of this Acura that will be auctioned off for the Pediatric Brain Tumor Foundation.

It would not be the last Iggy music of the night, as Miami legend, musical face of the NBA, and human pep rally DJ Irie kept the venue full until last call with an Iggy reprise of %u201CBlack Widow%u201D and %u201CTurn Down for What%u201D
before Wu-Tang members Raekwon and Ghostface Killah casually just walked on stage to say hello to their pal.

Irie, sporting a %u201CCake%u201D hat, is either is still campaigning for Jennifer Aniston%u2019s Oscar snub or looking ahead to the gigs he will be playing at Super Bowl next weekend in Arizona. Most likely, it was a reference to the Scottsdale club that is co-hosting a pop-up of TAO there next week.

Speaking of the behemoth at the bottom of Main St., Adrien Grenier and Diplo hit the spaztic GIF-making photo corner together (this booth that seems to be everywhere up here, called Phhhoto). Earlier in the night, Diplo had joined James Franco at the The Art of Elysium%u2019s party up in Deer Valley at the Black Label Media house.

%u201CShuttles only%u201D was the rule, as a barrage of emails throughout the day warned that %u201CPrivate cars, Uber, Taxis or walk-ups %u2026will be turned away at the guard gate.%u201D

The “Ten Thousand Saints” cast has been inseparable all weekend, arriving together at the Art of Elysium party. Earlier in the day, Hailee Steinfeld (center) picked up the $1000 Moose Knuckles Jacket (not pictured) that has been going out to the top names at the festival. (Getty Images)

Alexander Skarsgard rolled through with new face who has been everywhere at the festival, his %u201CThe Diary of a Teenage Girl%u201D co-star Bel Powley. She started Saturday night on the cover of photographer Jeff Vespa%u2019s %u201CVerge%u201D magazine, celebrating with the rest of the class of 2015 up-and-comers like %u201CGrand Budapest Hotel%u2019s%u201D Tony Revolari, everyone%u2019s favorite %u201CLobby Boy.%u201D

%u201CThis is my favorite thing that I do all year,%u201D Vespa told TheWrap of his third annual Sundance list. %u201CI love being the person that gives them that first boost.%u201D

Boost indeed. Revolari mirrored his %u201CBudapest%u201D character%u2019s name (%u201CZero%u201D) at this time last year, and by Sunday morning, the so-called %u201Clobby boy %u201Cwould be back in an Salt Lake airport lobby heading back to L.A. to present at Sunday night%u2019s SAG awards.

With a party thrown by a photographer, with lots of photographers and creative supporting their friend as guests, who was left to shoot? Credit Jonathan Leibson who captured faces like Chloe Rose, the Torontonian %u201CDeGrassi%u201D star who winters in L.A. and was reuniting with her %u201CHellions%u201D cast for the first time since they finished the film a year ago.

The class of 2015 gets a screening of the cover shoot video. (Mikey Glazer)

Although inside a heavily branded McCafe space, as in McDonalds, the bites like Falafel and marshmallow fudge squares were washed down with Dark Horse Wines, not shamrock shakes, but still, a happy meal all around.

Meanwhile, halfway up the hill, %u201CThe Kings Speech%u201D Oscar winning producer Iain Canning slinked in to his own %u201CSlow West%u201D party at the Grey Goose Blue Door. He got a pass from the %u201Cat-capacity%u201D space which had a line off of confirmed %u201Con-the-list%u201D guests chilling (literally) outside from the time it got dark out throughout the whole night.

Alexander Skarsgard and “The Diary of a Teenage Girl” screenwriter Phoebe Gloekner safely inside, and with choice real estate. (Getty Images)

Michael Fassbender stars in John Maclean%u2019s film with A24 about a teenage boy%u2019s expedition across 1800%u2019s America, but he is tied down shooting %u201CJobs%u201D in San Francisco, which you may remember from the Sony email hack. Canning and Fassbender reteam on %u201CMacbeth%u201D later this year, so there will be plenty of time for makeup cocktails.

After a dinner put on by Deleon tequila, Roth would go on to carve up a deal for “Knock Knock”. (Ben Draper Photography)

Cocktails, Tenderloin, and risotto filled the plates at the dinner for Eli Roth and Keanu Reeves%u2019 %u201CKnock Knock%u201D at 501 Main on Saturday night. Roth held down the head of the table, getting up to brandish a serious blade. Unlike the %u201CJew Bear%u2019s%u201D baseball bat, he used this weapon to slice a birthday cake for %u201CMiami Beach%u201D which is apparently turning 100 this year.

With the dinner part of the %u201CIt%u2019s So Miami%u201D dinner series, film commissioners worked the room, talking up The Rock%u2019s HBO football series currently shooting by the beach.

As of 10:45 p.m. on Saturday night, neither Roth nor any %u201CKnock Knock%u201D producers had cut any deals for the thriller that premiered at midnight, but %u201Ctalks were ongoing,%u201D a source connected to the film told TheWrap.

There were no talks coming from Adam Scott, who reportedly had lost his voice by Saturday night, unable to make the joint dinner party for %u201CThe Overnight%u201D, %u201CTangerine%u201D, and the Duplass brothers%u2019 animated TV series %u201CAnimals%u201D at the Kia Supper Suite inside Handle.

The %u201CGlassland%u201D cast could not be stopped in to making it to the same dinner series on the corner of Heber, with the bleached and buzzed Toni Collette arriving in Park City from Australia via London (the long way to fly). Co-star Will Poulter dropped down from Calgary, only to be on the ground for 12 hours.

Sunday%u2019s scene around town will include Zoe Kravitz, Ewan McGregor, Cobie Smulders, and an iconic man from an iconic brand that lots of party goers in the mountains can relate to: %u201CThe Hangover%u201D scene stealer Ken Jeong.

TheWrap%u2019s Party Report at Sundance is presented by the vehicles that are driving filmmakers to special events, the Kia Supper Suite, and TheWrap%u2019s Interview Studio at the Indiegogo Lounge at the festival, the all-new Kia Sorento.