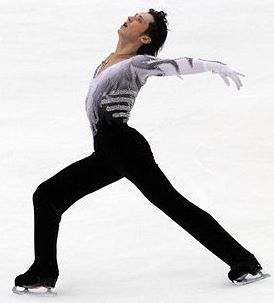 The series will air Mondays at 10:30 p.m. It launches Jan. 18 with a special 90-minute episode, "Pop Star on Ice," which screened at several film festivals over the summer.

Weir was heavily favored going into the 2006 Winter Olympics in Turin, Italy, but finished a disappointing fifth. Now 24, the skater knows he must dig deep if he is to secure what may be his last chance at a place on a U.S. Olympic team.

“Be Good Johnny Weir” follows Weir as he competes all over the globe, culminating in his appearance at the U.S. Men’s Nationals in January, the results of which determine whether he will vie for the gold at the 2010 Winter Olympics in Vancouver (Feb. 12-28).

“This series tells the hugely entertaining tale of an independent quest for greatness” Sarah Barnett, Sundance Channel executive VP and general manager, said in a statement. “Weir is a very compelling individual, someone who takes the art of skating to a higher level, and we’re excited to give our viewers the chance to follow his adventure across the ice.”

“Be Good Johnny Weir” is directed and produced by James Pellerito and David Barba, who also are executive producers. The series is directed, produced and co-financed by Original Media.