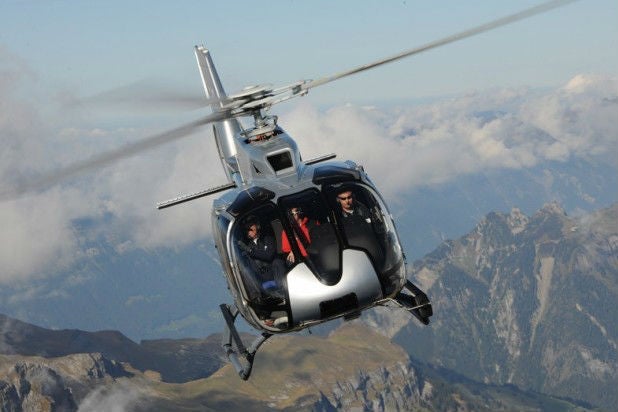 Hollywood is going to have to rough it at this year’s Sundance Film Festival as two major conveniences it previously provided — private helicopters and a tricked-out lounge to wait for Uber rides on Park City’s busy Main Street — have been axed.

In 2016, for-hire helicopters from companies Uber and Blade spared talent and executives the hassle of hitting the highway — with 15-minute private flights from the Salt Lake City airport to a private field just south of the Sundance campus in Park City, Utah.

Turns out the wealthy residents of the charming ski hamlet don’t want noisy show business people hovering above their homes.

“Park City officials made it extremely clear that they do not want to allow helicopters to land within their jurisdiction, a spokesperson for Blade (most known for shuttling Manhattanites to the Hamptons in the summer) told TheWrap. Additionally, alternative landing areas would have resulted in a subpar experience.”

Citizens raised eyebrows over the lot where the tent was erected — normally a free public lot being used as a pickup hub for a privately held company. Uber told the Park Record it intends to create a lounge where drivers can wait away from the bustle, and host “multiple, non-exclusive pickup locations” off of Main Street.

An Uber spokesperson did return TheWrap’s request for comment.

TheWrap team is heading to Park City with the rest of the helicopterless, taxi-hailing masses. Get our latest coverage on the films, the deals and the buzz from Utah.