As festival favorites like “Manchester by the Sea” and “Tallulah” emerge, the first weekend shifts into gear, and Utah gets a fraction of the storm that hit the East Coast, here’s the latest from Park City, Utah. 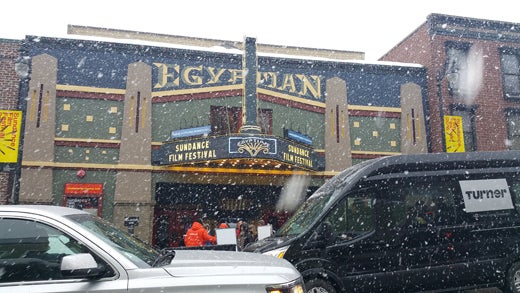 A view of the Egyptian on Saturday afternoon, January 23, 2016. (Mikey Glazer)

It doesn’t compare to the socked-in East Coast #Blizzard2016, but the falling flakes on Saturday cast an idyllic cover over the ski town-turned-cinema-hub. Morgan Spurlock was the most prepared. 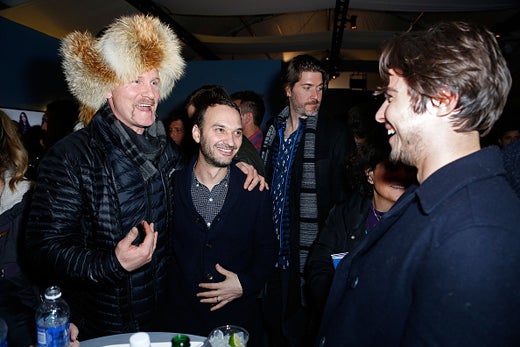 : Created Water on Mars, Now Focuses on Water on Earth 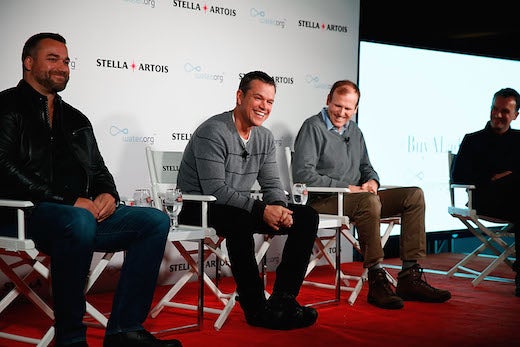 Matt Damon is a co-founder of Water.org. (Rick Kern/Getty Images for Stella Artois)

He grew plants from feces on Mars and brought fresh water to the red planet in the Oscar-nominated “The Martian.” But on Saturday, Matt Damon was focused on water on Earth. A co-founder of Water.org with Gary White, Damon made a hush-hush appearance at the event at the Stella Lounge at the Village at the Lift while in town for the film he produced, “Manchester By the Sea,” starring his “Good Will Hunting” buddy Casey Affleck.  USA Today noted that this springs a “new Damon-Affleck friendship record.” 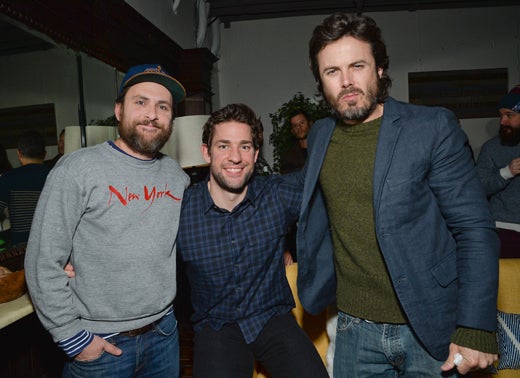 on the Sundance Career Springboard 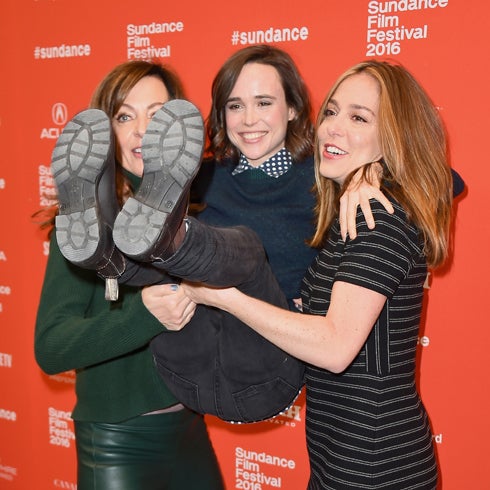 “‘Hard Candy’ (a 2005 Sundance thriller) was here when I was 17,” Ellen Page told TheWrap at a reception for “Tallulah” on Saturday afternoon. “(Sundance) is part of the reason why I’m fortunate enough to have a career and get to do this thing that I love.”

Ready for an Awards Podium Near You: “Emerging Triple Threat” Nate Parker 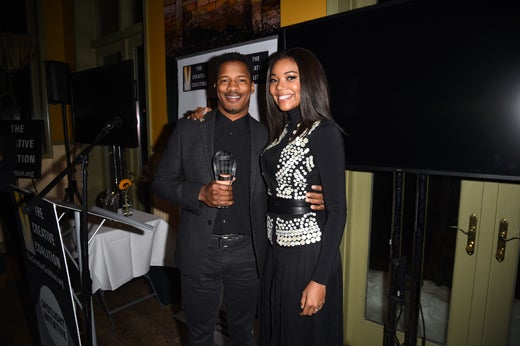 The triple-threat Nate Parker and Gabrielle Union partnered up for “Birth of a Nation” and the Creative Coalition Spotlight Initiative Awards at the Kia Supper Suite on Saturday night, January 23 (Nicholas Hunt/Getty Images)

Nate Parker stole the show at the Creative Coalitions Spotlight Initiative Dinner on Saturday night with an extemporaneous speech that would infuse any awards show producer in a control room with an allergy to the playoff music button.

When Gabrielle Union took the podium to introduce “The Birth of a Nation” writer-director-star on Saturday night, she rebranded him “an emerging triple threat.” She also gave him a more personal title – “my friend and employer.” 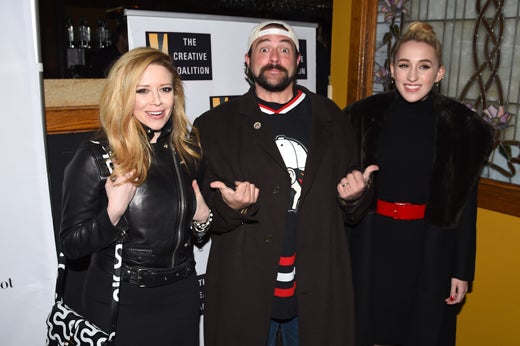 In accepting the award from co-star Union, Parker gave an impassioned speech that silenced the clanking of dishes inside the Kia Supper Suite and hushed the low rumble coming from a standing room only crowd that included Justin Long, Michael Jackson attorney and manager John Branca, Kevin Smith, Natasha Lyonne, Harry Hamlin, Annalynne McCord, Alysia Reiner, IMDb founder Col Needham, and Spike Lee, who was Parker’s own guest of honor. 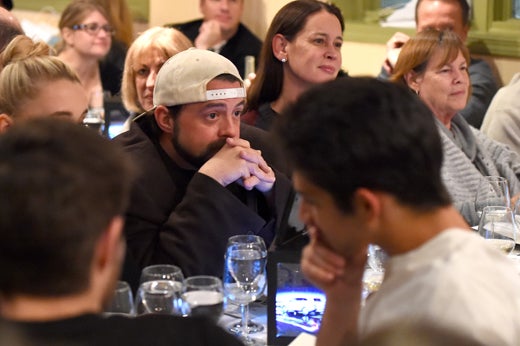 True to the spirit of Sundance, indie filmmakers Kevin Smith and Spike Lee broke bread together. Ironically, because of the Creative Coalition’s non-affiliation with the festival, nobody at the event would officially say the word “Sundance” on the microphone. (Nicholas Hunt/Getty Images)

“I’m dedicating half of this award to you,” Parker said to Lee. “But I’m keeping it at my house.”

Parker recounted how he sought out Lee’s cell phone number, texted him, and got a call back within five minutes. When Lee told him to get in a cab and meet him in DUMBO immediately, Parker did not know the Brooklyn neighborhood from the Disney elephant. 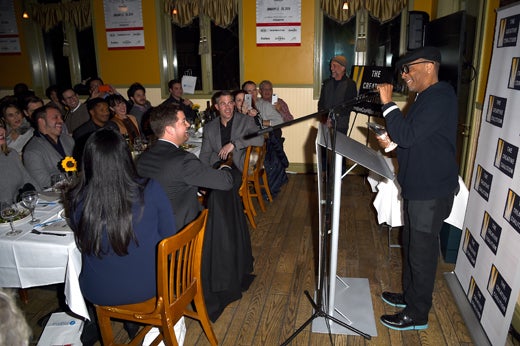 Spike Lee backed up his Oscar boycott plans earlier on the day on Saturday. More on this below. (Nicholas Hunt/Getty Images)

Minutes later, Parker was sitting next to Lee during a “Do the Right Thing” book signing while discussing his upcoming slave revolt project. The day continued with dinner and then a mentorship. 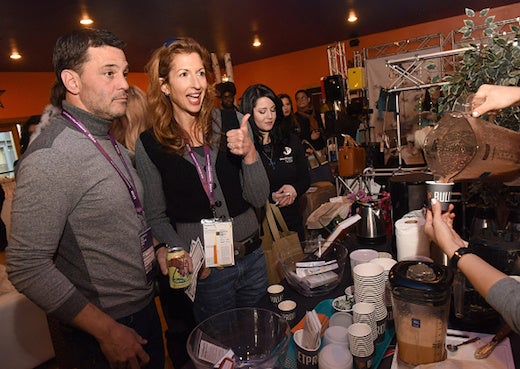 “(Lee) is like my father, my mentor, my uncle,” Parker said. Lee himself was among the winners that included “Orange is the New Black’s” Alysia Reiner for her film “Equity,” the “first female-driven Wall Street movie.”

Who Is Minding the Shop Back on Melrose? 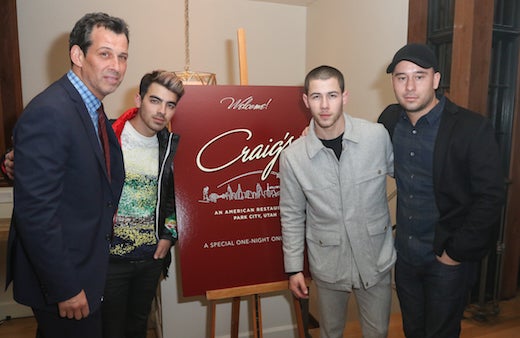 The Craig behind Craig’s, Craig Susser, Joe Jonas, Nick Jonas with host Phil McIntyre sat down for McIntyre and V Magazine’s dinner party for “Goat”. Craig’s popped up in Park City for one night only. No word on the number two manning the dinner floor back on Melrose. (John Parra/Getty Images)

Meanwhile in other Craig news… 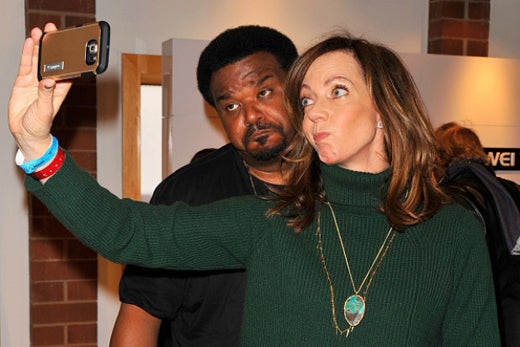 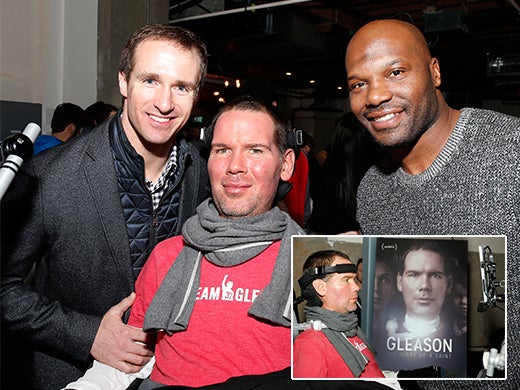 While Sunday is one of the NFL’s biggest days of the year with the slate for Super Bowl 50 to be decided, New Orleans Saint Drew Brees was here in Park City supporting former teammate Steve Gleason. Gleason’s physical deterioration is reportedly presented in graphic, unsanitized detail in the documentary about the father, husband, former NFL player, and ALS battler who began making videos for his child before he lost the ability to speak. 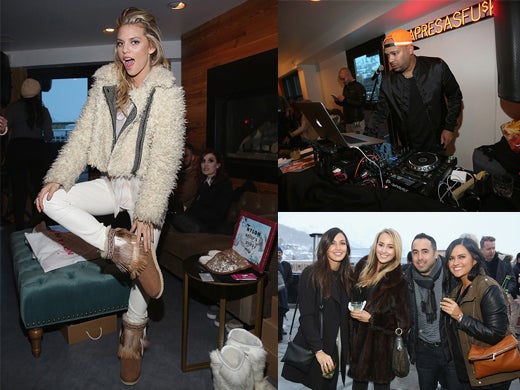 Annalynne McCord, Mel Debarge, and invitees who made it up the 4th floor skydeck at Nylon Magazine and Dream Hotels’ Apres Ski on Saturday, January 23, 2015. (Getty Images)

At Nylon magazine and the Dream Hotels’ Apres Ski cocktails on the choice sky deck real estate at Heber and Main, the crafty DJ Mel Debarge had a warning for the fashionable crowd that had made it through the tight-door and long line downstairs: “If you don’t dance, I’m going to turn off and go home. I’ve done it before.”

After filling the fully daytime dance floor with Justin Bieber‘s “Sorry,” he returned to the mic a bit sorry himself: “OK, I won’t go home.”

The Dream Hotel arrives as part of Hollywood’s building boom, aiming for a summer opening. 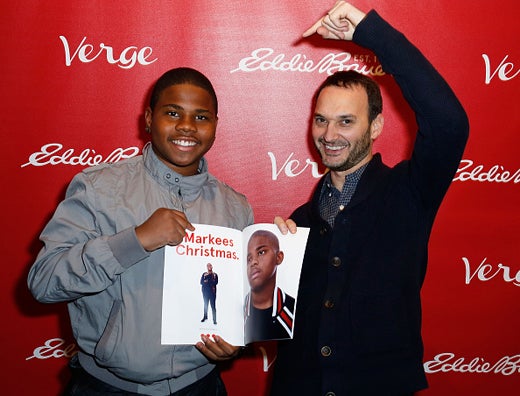 Markees Christmas is one of Jeff Vespa’s “Class of 2016” picked for the Verge (actors on the brink). Saturday night’s party had a long line outside the Eddie Bauer space. (Randy Shropshire/Getty Images for Verge)

“I want to thank President Cheryl Boone Isaacs, the Board of Governors, for doing the right thing (in making swift changes to Academy membership and voting policies). I’m still going to the (NBA) game (that night). I’m not showing up. My wife and I, we made the decision, we’re not going to change our decision. And we’ll be at Madison Square Garden, Sunday night, February 28th, New York Knickerbockers against the Miami Heat.”

Lee made the comments at the IMDb studio earlier on Sunday.