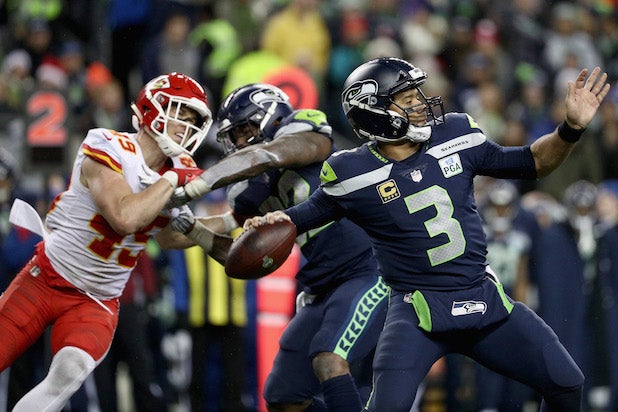 Scoring a 12.6 rating/24 share among metered-market households, the Seattle Seahawks’ win against the Kansas City Chiefs outshined the 9.0 rating/17 share brought in by the broadcaster’s comparable Minnesota Vikings-Green Bay Packers “SNF” game in 2017, which aired on a Saturday.

The Seahawks-Chiefs matchup is also the top Week 16 “SNF” game since 2014 and marks the 13th time in 16 games that the franchise is up versus last year, including Thanksgiving. And, naturally, the Seahawks’ victory led NBC to yet another easy Sunday primetime win in both the demo and total viewers.

Due to the nature of live sports, the below fast-national ratings for NBC and CBS are subject to significant adjustment when final Nielsen numbers come in.

NBC was first in ratings with a 4.2 rating in the advertiser-coveted 18-49 demographic and in total viewers with an average of 15.2 million, according to preliminary numbers. That was all due to “Sunday Night Football” and its pregame show.

Also Read: What Happens if CBS Pulls the Plug on Nielsen Ratings

ABC and Fox tied for third in ratings, both with a 0.5 rating.

Fox was fourth in viewers with 1.7 million, filling its primetime block with encore presentations.

Sunday’s Nielsen ratings for the Spanish-language broadcasters Telemundo and Univision were not immediately available at the time of publication.